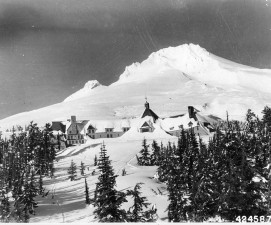 "Mt. Hood and Timberline Lodge are shown under a blanket of snow during the winter of 1942-1943. The lodge was closed because of war conditions. USFS photo #424587 by George Henderson (not an official USFS photographer)."

Timberline Lodge was built as a ski lodge 6,000 feet up on Mount Hood, and it still serves that purpose; but it was equally a showcase for the accomplishments of the Works Progress Administration (WPA).

Timberline Lodge  was constructed between 1936 and 1938, a rapid pace considering the frequently inclement weather on the mountain. President Franklin D. Roosevelt dedicated the Lodge on September 28, 1937 – five months before completion of the interior in February 1938 – after which the lodge was opened to the public. The ‘Magic Mile’ chairlift and Silcox Hut at 7,000 feet opened in 1939.

The four-story structure was built in Northwest rustic style using large timbers and local stone, with a striking central “headhouse” built in a hexagon around a 90-foot chimney with large fireplaces on all sides. The chief architect was Gilbert Stanley Underwood, noted designer of the Ahwanhee Hotel at Yosemite and other lodges in national parks, with modifications by the rest of the team of architects and engineers.

The interior is a marvel of decorative elements designed to feature Northwestern native and pioneer styles in wood carving, furniture, textiles, metal work, light fixtures, stone work and paintings.  The interior work was overseen by Margery Hoffman Smith, Oregon director of the Federal Art Project of the WPA. She used local craftsmen and women, who were given a high degree of freedom in coming up with original designs.  The result is one of the most extraordinary and delightful creations of the entire New Deal. (Furniture, textiles, lamps and other craft items have been repaired and restored, and in some case replaced, over time, following the original designs. A comprehensive catalogue of all interior art is provided in Munro 2009).

‘This Timberline Lodge marks a venture that was made possible by W.P.A., emergency relief work, in order that we may test the workability of recreational facilities installed by the Government itself and operated under its complete control.

Here, to Mount Hood, will come thousands and thousands of visitors in the coming years. Looking east toward eastern Oregon with its great livestock raising areas, these visitors are going to visualize the relationship between the cattle ranches and the summer ranges in the forests. Looking westward and northward toward Portland and the Columbia River, with their great lumber and other wood using industries, they will understand the part which National Forest timber will play in the support of this important element of northwestern prosperity.

Those who will follow us to Timberline Lodge on their holidays and vacations will represent the enjoyment of new opportunities for play in every season of the year. I mention specially every season of the year because we, as a nation, I think, are coming to realize that the summer is not the only time for play. I look forward to the day when many, many people from this region of the Nation are going to come here for skiing and tobogganing and various other forms of winter sports.”

In the 1980s, a second building, the “Wy’East” lodge, was added to help take the pressure off the Timberline Lodge by providing space for ski rentals, lockers, a cafe, a gift shop and so forth. Its brutalist hulk stands in gloomy contrast to the beauty of the Timberline Lodge.

Timberline Lodge was placed on the National Register of Historic Places in 1973. 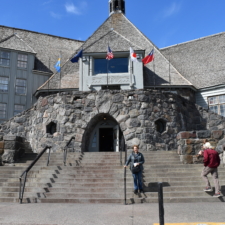 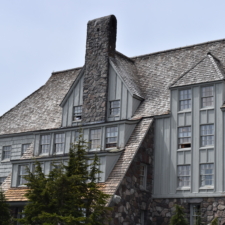 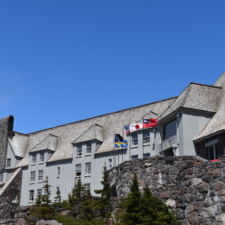 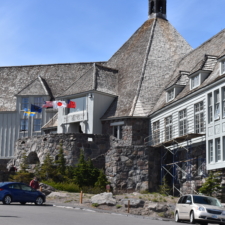 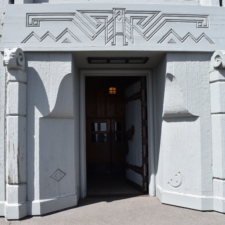 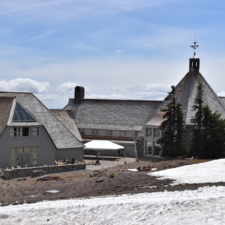 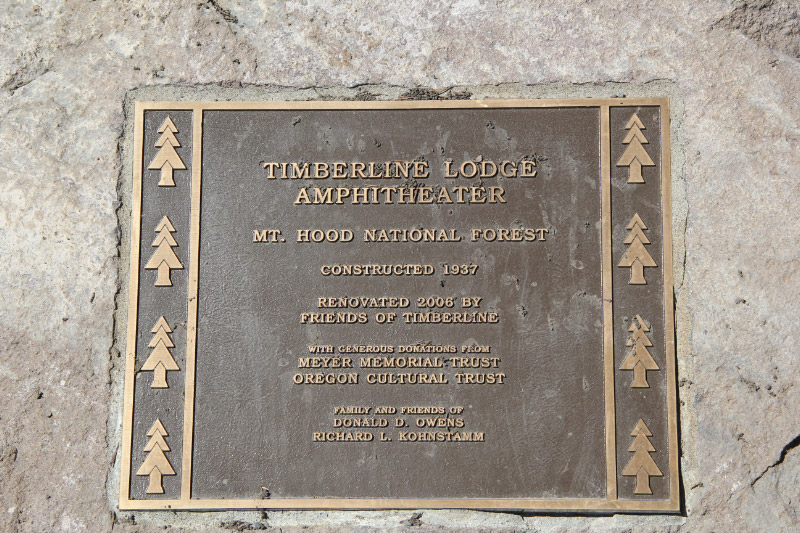 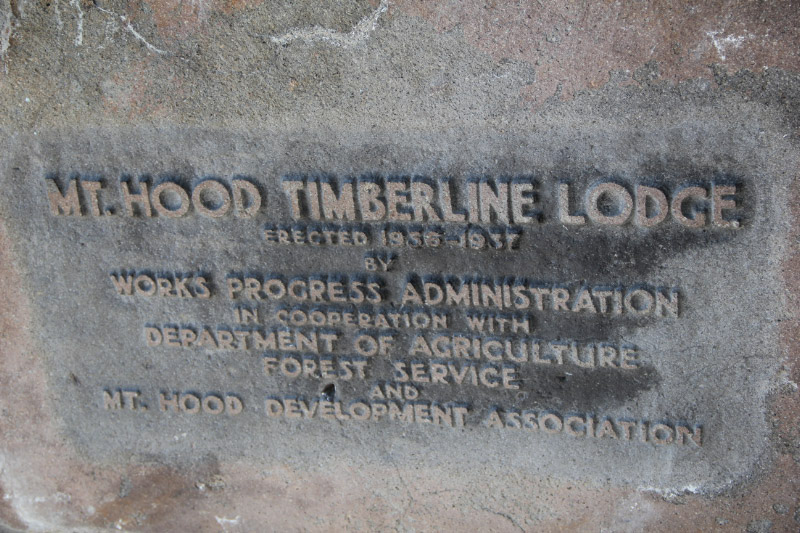 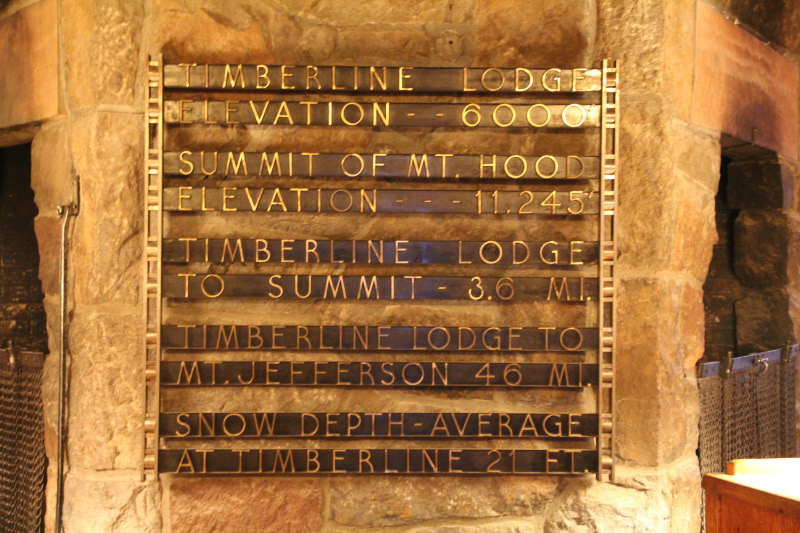 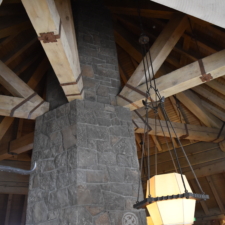 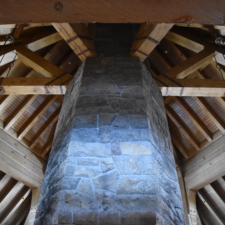 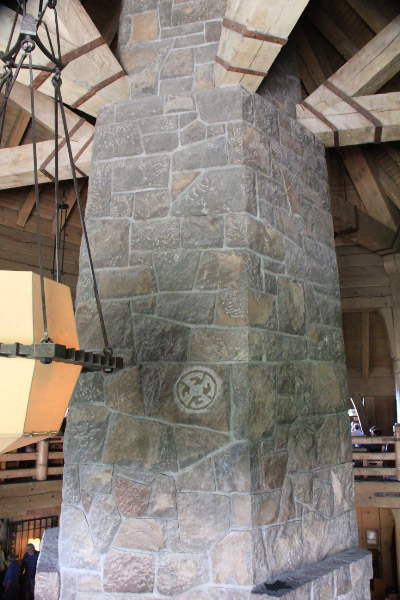 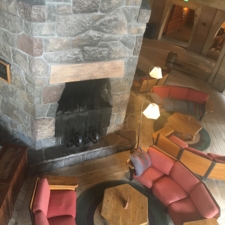 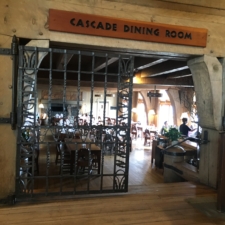 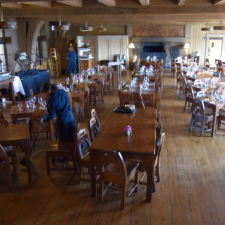 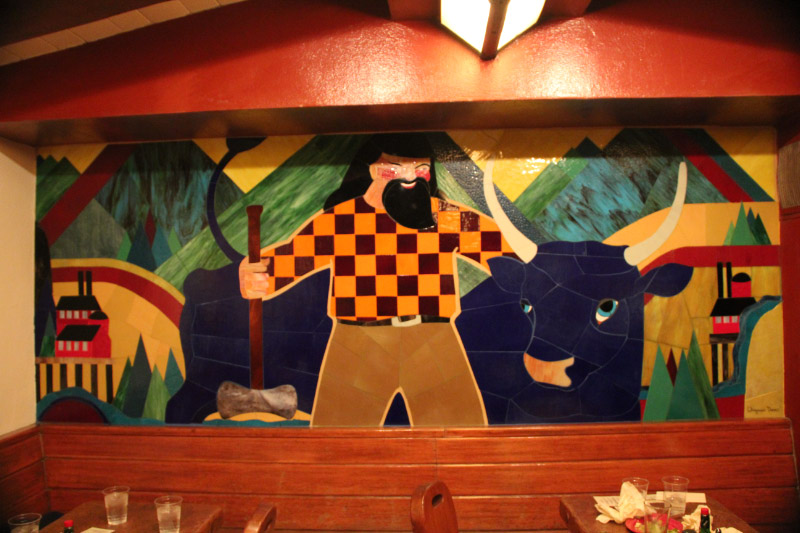 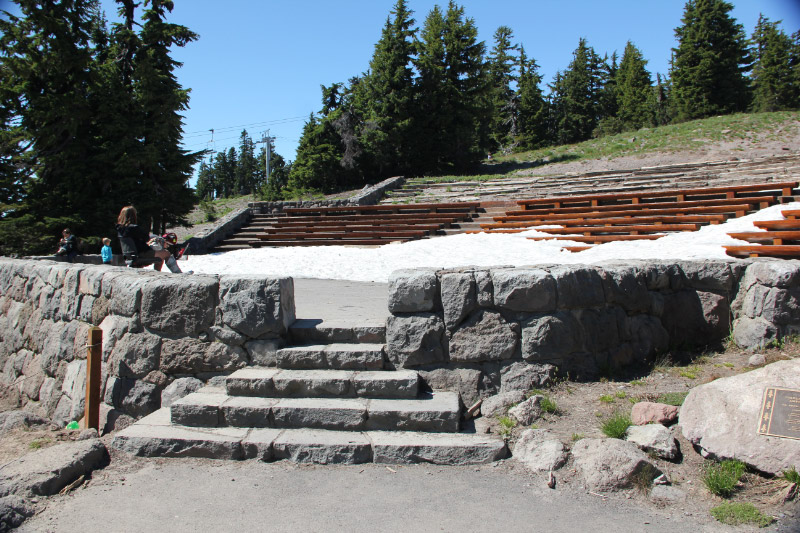 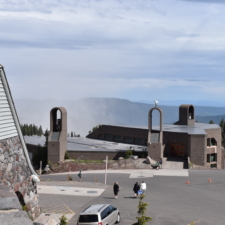 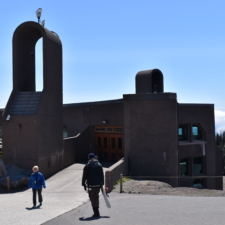 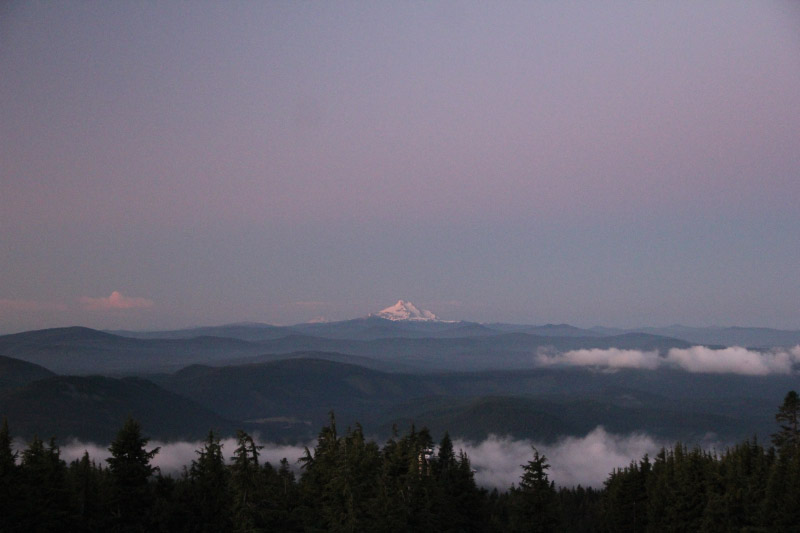 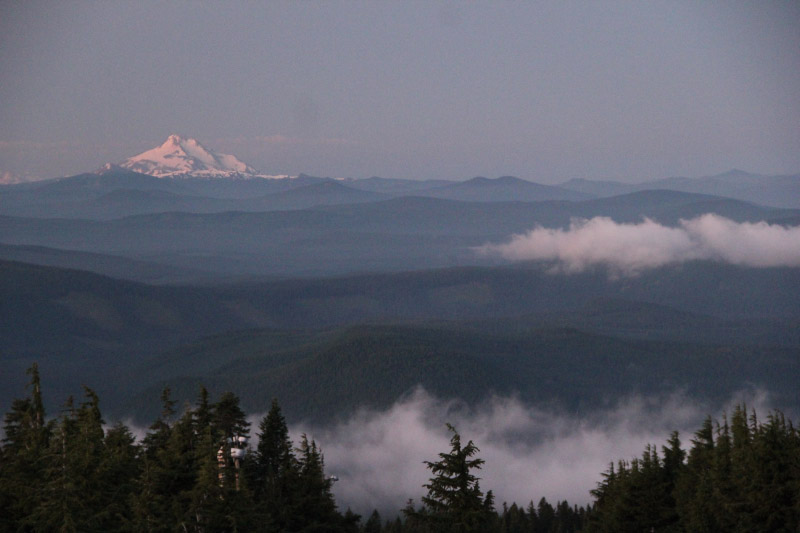