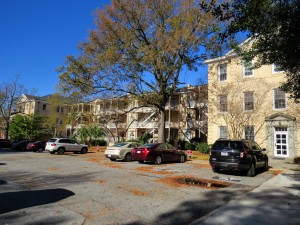 Thornwell College, a dormitory building on the University of South Carolina campus in Columbia, SC, was expanded in 1937, “part of an extensive building program on campus launched in the late 1930s as part of the New Deal. Originally planned as a student union building, Maxcy College and new wings at Thornwell College were erected at a cost of $225,000, a portion of which was paid for by the Public Works Administration.” (USC)

“New wings, then named Coker and McBryde, were added in the late 1930s as part of a New Deal building program.” (USC)

The building is located at the north end of campus along the south side of Pendleton St. between Marion St. and Bull St.