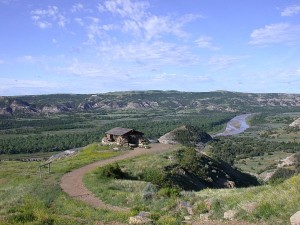 In the badlands, the CCC, along with the Emergency Relief Administration (ERA) and the Works Progress Administration (WPA), worked on numerous projects. Even as the men were working on these construction projects, it was unclear who would ultimately be responsible for managing these recreation areas; Theodore Roosevelt National Memorial Park was not established until 1947.

In the North Unit of the park, the CCC built the two picnic shelters in the Juniper campground area and the River Bend Overlook shelter. In the South Unit, the CCC built the now-abandoned East Entrance Station, the entrance pylons, and portions of the park’s roads and trails. The CCC also built structures at the nearby Chateau de Mores State Historic Site.”