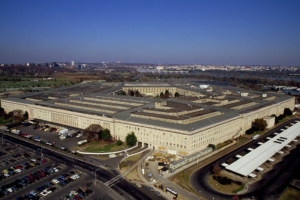 The Pentagon is the headquarters of the United States Department of Defense and the largest office building in the world.  It was constructed from August 1941 to January 1943 in order to centralize the administration of the U.S. armed services during World War II.  The burgeoning War Department moved from what is now the Truman Federal Building (home of the State Department), which had just been completed in 1940.

While it may not appear to be a typical New Deal public works project, the Pentagon ought to be considered as part of the New Deal legacy.  It was built for the War Department by the administration of President Franklin Roosevelt in the final two years of the New Deal decade, 1933-43. The project was conceived and overseen by General Brehon B. Somervell of the Army Corps of Engineers, who had directed the Works Progress Administration (WPA) in the New York region since 1936, and carried out by the Army Quartermaster Corps.

Furthermore, military work is more typical of the New Deal than generally thought – for better or worse.  That is, the New Deal aided the pre-war military buildup by providing massive funding for military-related work.  The WPA and the Public Works Administration (PWA) each spent at least a half-billion dollars on projects involving army bases, navy ships, airports, roads, and so forth, an effort that ramped up from 1939 on – taking 20% of the WPA budget in 1941 (Smith, 2006, pp. 204-05, 217).

The Pentagon’s architectural design was done by civilian architects George Bergstrom and David Witmer, both of whom were employed by the Quartermaster Corps’ Construction Division (later incorporated into the Corps of Engineers) (National Historic Landmark Nomination, 1992).  The lead construction contractor was John McShain, Inc.

The initial site for the Pentagon was on federal land just east of Arlington National Cemetery, known as the Arlington Experimental Farm. President Roosevelt decided against it because of concerns for the propriety of putting the war department right across from the hallowed grounds of the cemetery. Instead, the site was moved somewhat farther south, on land originally slated for an airport named after Herbert Hoover (National Airport was then being constructed even farther south along the Potomac River).

The Pentagon’s shape and size are the best-known features of its architecture, but it is also significant as “one of the last of Washington’s monumental buildings designed according to the principles set out by the 1902 Senate Parks Commission (known as the McMillan Commission).  It was the last major public building in the vicinity of Washington’s Monumental Core designed in the Stripped Classical mode, which passed out of style in Federal architecture shortly thereafter” (National Historic Landmark Nomination, 1992).

Originally, the Pentagon was to be built a bit north of its current location, next to the Arlington Cemetery.  There were objections to that location, however, because (among other reasons) the large building would interfere with the Capitol-to-Arlington vista. This long vista – across the Potomac to the National Mall, Washington Monument, and Lincoln Memorial, and taking in the Arlington Cemetery on the Virginia side – was a dream of Washington’s original planner, Pierre Charles L’Enfant, and had been brought to fruition in the 1930s through renovations by the New Deal.

President Roosevelt ended the controversy by moving the Pentagon site to its current location.  FDR also contributed to the design of the building: “The exterior facades of the Pentagon were faced with limestone at the direction of President Franklin D. Roosevelt, who felt that the use of marble would be an extravagance” (National Historic Landmark Nomination, 1992).

Not everyone was pleased with the Pentagon, however.  “Gilmore Clarke, the chairman of the Commission of Fine Arts, whose office was charged with advising the president and Congress on federally funded artistic and public structures, criticized [the Pentagon] as ‘one of the most serious and worst attacks on the plan of Washington’ (Encyclopedia Britannica).

Construction of the Pentagon cost $83 million, far exceeding original estimates.  It contains over 4,000,000 square feet of space for 40,000 workers and includes 200 restrooms, 650 drinking fountains, multiple cafeterias, a 500-foot long soda bar, a barber shop, a drugstore, a post office, a bank, and more. The building requires hundreds of janitors to keep it clean.

Amazingly, the Pentagon was originally intended to be a temporary structure, perhaps to be converted into a hospital after the war.  Nevertheless, the Cold War and continuous Middle-East intervention changed that plan, and the Pentagon is now a fixture in American society and the Department of Defense commands more of the discretionary federal budget than any other government agency. 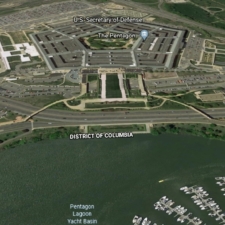 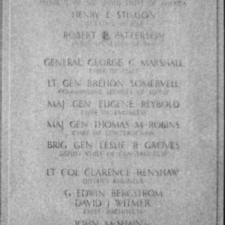 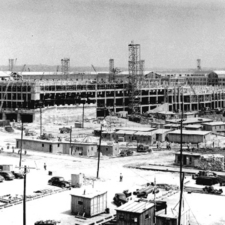