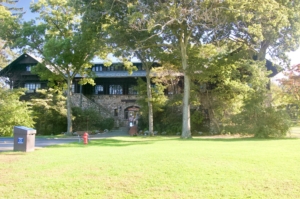 The Palisades Interstate Park system, a major beneficiary of New Deal public works projects, spans New York and New Jersey and stretches from The Palisades–cliffs overlooking the Hudson River in sight of Manhattan–to forested hills dotted with lakes in the western Hudson Highlands.

The park system was founded in 1900 through the activism of women’s clubs that fought to protect the Palisades from quarrying. They were aided by some of the richest men in America, among them J.P. Morgan, the Rockefellers and the Harriman family. Mixing civic idealism and the desire to preserve the beauty of their own region, they purchased or donated land to create a network of parks in New Jersey and New York. A bi-state commission drawn from both states governed the system.  In 1937 the Palisades Interstate Park Commission was federally chartered, enshrining its 37-year old operations in a secure legal framework with equal numbers of commissioners from New York and New Jersey.

The New Jersey end of the system, concentrated in 2,452 acres of land on the west bank of the Hudson River, eventually became known as the Palisades Interstate Park in New Jersey. The larger northern end of the system in New York contains whole parks, including the 5,067-acre Bear Mountain State Park and the 46,613-acre Harriman State Park.

As early as the 1920s, the parks were known for bathing beaches, hiking trails, and picnic grounds. Ferries and steamers from Manhattan made the parks accessible to residents of New York City. Group camps that served charitable organizations, the Girl Scouts, Boy Scouts, and YWCA were a prominent feature in the New York section of the park.

The New Deal significantly expanded the park system’s facilities. In New Jersey, New Deal workers from agencies such as the Civil Works Administration, the Civilian Conservation Corps and the Workers Progress Administration renovated existing facilities and created bathhouses, roads, picnic areas, and trails. In New York, with a larger landscape to work on, a similar mix of New Deal programs created roads, trails, lakes, a ski hill, a lookout tower, and a park headquarters; developed historical sites; and improved or expanded existing facilities such as the Trailside Museum. WPA workers also built an administrative building for the New York section of the park at Bear Mountain.

In the post-World War II decades, automobiles became the dominant way of traveling to the parks, foremost on the Palisades Interstate Parkway—a road envisioned under the New Deal that opened in 1958. Since the 1980s funding shortages have made park maintenance difficult, but the park has expanded in New York. Today, the Palisades Interstate Park system covers 125,000 acres and receives 9 million visitors annually, making it one of the most popular parks in the United States. New Deal structures remain central to the parks’ appearance. 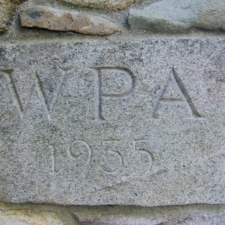 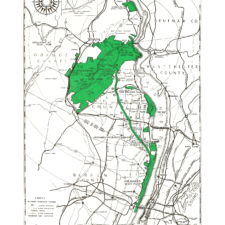