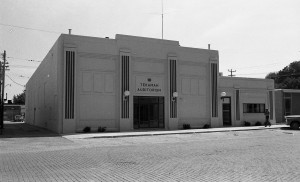 As early as July 1935, the Works Progress Administration (WPA) and the Tekamah Fire Association investigated the possibility of constructing an auditorium in Tekamah that would also house the town’s fire-fighting apparatus. An application was submitted to the WPA requesting the erection of a $25,000 building, requiring a local outlay of only $6,000. The project was approved by the WPA within the next calendar year, and plans began to proceed. The community was “liberal with praise for the firemen who [are] sponsoring the long-needed improvement.”

By the end of October 1936, the foundation was being excavated by unskilled WPA labor. Plans called for the building to be 50 by 140 feet, with a stage approximately 23 by 50 feet. The dance floor would accommodate 750 couples. The auditorium would be located on K Street across from the Presbyterian Church, on a block that had once been occupied by the opera house, which was lost to tornado thirty years earlier.

Construction proceeded slowly. In October 1937, the Burt County Herald reported that the wall forms for the concrete walls had been removed. Steel beams were put in place to support the roof. A kitchen, restrooms and boiler room was constructed underneath the stage. A tier of cement seats rose from the floor on either side of the main entrance. The newspaper acknowledged that the construction of the building had been a slow process, but encouraged its readers by saying that it would be well worth waiting for. Unfortunately, the newspaper was unable to anticipate further delays. The money allotted by the WPA had not been sufficient for the construction of the building AND providing for a boiler and furnishings. In April 1938, the WPA set aside more funds for the building, which would purchase light fixtures, the boiler, and furnishings, such as settees and stage curtains. The curtains began to arrive in September 1938, and were installed. The settees were specially built to fit the places in which they were set. The final details were starting to fall into place.

On November 30, 1938, the Tekamah Auditorium was dedicated with a ball sponsored by the firemen who supported the construction of the building. “Omaha’s smartest dance orchestra,” Freddy Ebener’s 12 piece Orchestra and Lady Entertainer were hired to entertain the crowds that were sure to come. The firemen decided to forego any formal speeches of dedication in favor of enjoying the ball. The Burt County Herald declared,

Tekamah now has an auditorium equal to the best to be found anywhere outside of the larger cities. The public should show their appreciation of what the firemen have made possible by buying tickets and attending the dedication ball.

Two thousand people were estimated to have attended the ball, traveling from as far away as Lincoln, Omaha, Sioux City, Columbus, Fremont, Grand Island and West Point to attend the affair.

Location notes: South side of K Street between 13th and 14th Streets