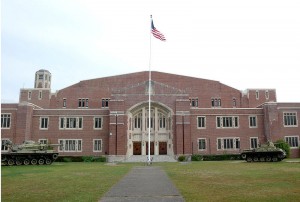 The Public Works Administration (PWA) was a primary funding source for the construction of the Teaneck Armory.

“Completed in 1936 at a cost of nearly $1 million, the Teaneck Armory — with its 37-foot-high arching roof — has played a valuable role not just in the current war on terrorism, but also during peacetime.

Sitting on 13.66 acres, the brick-and-stone structure was built by Depression-era laborers. They each spent only two days a week on the job because the government stretched the project to keep people employed as long as possible.”   (http://www.teaneck.org/)

The WPA was involved in a minor capacity at the site, constructing a pistol and rifle range at the armory. WPA Official Project #265‐1‐22‐37.