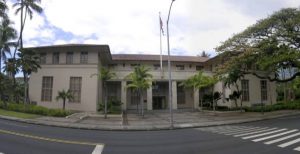 A Public Works Administration grant of $97,795 funded new construction work on the Tax Office building in Honolulu. The work was underway in 1938. Listed as Docket No. TH-1035-DS, the project was part of the PWA’s non-federal projects expenditure for the Territory of Hawaii for 1938-1939. The building, also known as Hale Auhau, which translates as “tax house,” served as the headquarters of the Department of Taxation. Designed by Henry Stuart, architect for the Territorial Department of Public Works, the building is representative of the Mission Revival or California Mission style. Architects of that era designed numerous public buildings in this style, which adapted the functional requirements of institutional facilities to the tropical climate and regional building practices of Hawaii. Since the 1980s, the building has been occupied by the Department of the Attorney General. Hale Auhai is listed in the National Register of Historic Places as a contributing property in the Hawaii Capital Historic District.

The Index to the Honolulu Advertiser & Star-Bulletin, 1929-1969 lists the timeline for the construction of the building: