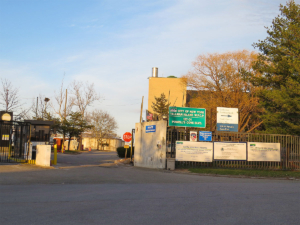 “Under the auspices of the New York Department of Sanitation, between 1937 and 1944, three new wastewater treatment plants were constructed — Wards Island in Manhattan, and Bowery Bay and Tallman Island in Queens. These facilities were designed to reduce pollutants in the Harlem River and in the East River, whose dark and murky waters had some of the lowest dissolved oxygen concentrations in the harbor. During the summer months, dissolved oxygen levels were often zero, which caused unpleasant odors. The city and its waterways benefited from an infusion of funds from the Works Progress Administration (WPA), an ambitious public works program that was part of President Franklin D. Roosevelt’s New Deal. The Wards Island plant, located in the middle of the East River, was built to handle flows from the east side of Manhattan and the lower part of the Bronx. The plant came on-line in October 1937 and was the first to use the conventional activated sludge process, a great leap forward in wastewater treatment. A few years later, the activated sludge process was incorporated into the Bowery Bay (1939) and Tallman Island (1939) plants. During this period, New York, New Jersey and Connecticut established the Interstate Sanitation Commission (ISC) to protect, regulate and set water quality standards for the entire harbor.”   (www.nyc.gov)