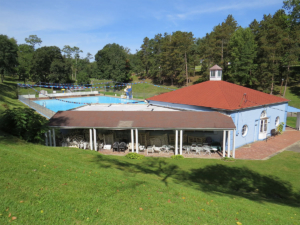 Multiple New Deal agencies worked to construct a municipal pool for Canonsburg, Pennsylvania in 1934—1936. The prospect of a pool had been discussed for years, though no progress was made until assistance from New Deal work relief programs was made available.

The pool facility was constructed in stages on what had then been a ravine, in the municipal park. Initial construction, which involved the Civil Works Administration (CWA), would be limited to leveling the site, installing storm sewers to “enclose” the ravine, and constructing the 100-foot-by-200-foot pool and filtration plant—not the bathhouse or sidewalks. Work was to be done “by hand with picks, shovels, and wheelbarrows.” Ninety men were put to work when construction began in January 1934; however progress was slow and the CWA was discontinued before much work was done, and work was halted after 11 weeks. Work proceeded sporadically, continuing under the Federal Emergency Relief Administration (FERA).

By April 5, 1935 nearly 100,000 man-hours of work had been done; the “pool basin was complete and 3,500 feet of road had been built … Some 900 cubic yards of concrete had been mixed and poured for the main pool and the “kiddie’s pool.” Crosby Run had been enclosed in 700 feet of culvert 48 inches in diameter. The workmen had “dug trenches and laid 250 feet of sanitary sewer, 700 feet storm sewer, 600 feet water line and 1000 feet french drain.” In addition, the filtration system had been installed; an advertisement upon the pool’s dedication would note the Perkins Filtration System and claim the pool water “fine and pure enough to drink!” Finally, 1,200 feet of cast iron pipe had been placed for the “scum gutter and supply jets,” and electrical conduits were installed as well.

Finally, construction included a bath house, whose construction was rushed in an effort to open the pool by July 4th, 1935. Intense efforts were made to fill the pool to its 650,000-gallon capacity by this time using both saltwater and freshwater sources, and two light towers were installed on islands in the pool. On opening day, “the lobby had no roof and there were no windows, but the dressing rooms were usable.” And so 700 people rushed to use the pool at its opening as thousands of people watched from the new road along the hillside. Demand during the first few days overwhelmed expectations.

Work had not been completed on the bathhouse when the FERA was discontinued. Its successor agency, the Works Progress Administration (WPA), “approved an appropriation of more than $10,000 to complete the bath house. Another $20,000 was approved for general improvement of the park …” WPA workers completed the bathhouse, installed a walkway, and landscaped the entrance.

A plaque on the bathhouse reads: 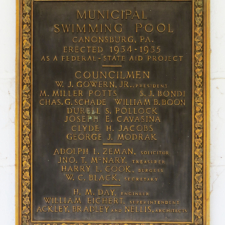 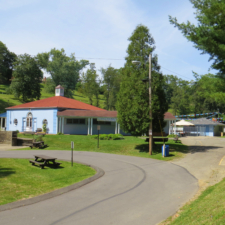 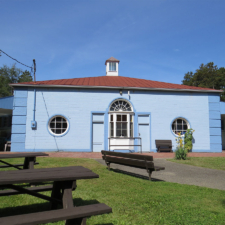 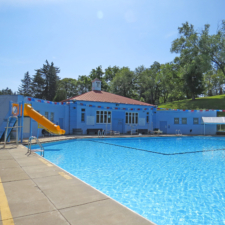 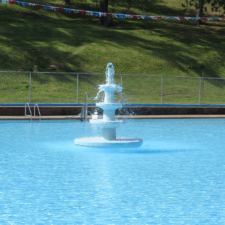 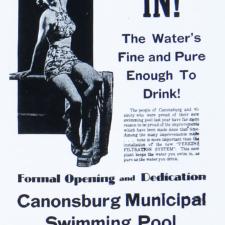 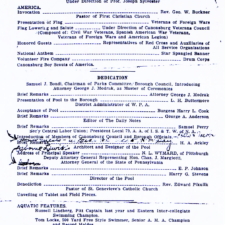