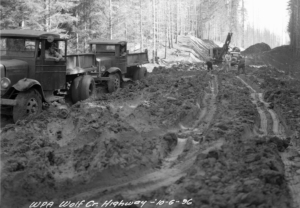 “The Sunset Highway No. 47 (see Oregon highways and routes), in the state of Oregon, is an official designation for the portion of U.S. Route 26 between its western terminus, south of Seaside, and the interchange with Interstate 405 in downtown Portland…The road was originally named the Wolf Creek Highway and was under construction by January 1933.[3] Both the Works Progress Administration[4] and the Civilian Conservation Corps participated in the construction during the Great Depression.[3] Portions of highway officially opened to the public on September 19, 1941. In 1949, the highway was completed.”

“The Wolf Creek and Wilson River highways were designed to provide a more direct route from Portland to the Oregon Coast, as well as work relief for 1,500 men.  Improved access also helped to bolster the tourist economy in Tillamook, Seaside and Cannon Beach.”