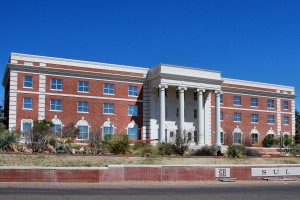 Sul Ross State University, named for former Texas Governor Lawrence Sullivan “Sul” Ross, was founded in 1917. The university built Lawrence Hall, also named after Sul Ross, in 1938 to be a dormitory for 116 female students. The Public Works Administration provided the university a loan of $83,000 and a grant of $67,900 for the construction of the building. In 1996, Lawrence Hall was converted for use as an academic facility, housing the Department of Behavioral and Social Sciences.

Per the El Paso Herald-Post in 1939: “On a sunny south slope the new dormitory commands a sweeping view of the rolling hills southward to the Chisos Mountains. The building provides accommodations for 116 girls with every room steam heated. A large central living room is the social center.

Ample space is available for exercise of “home talents,” with sundries on two floors, equipped with washing machines, built-in tubs, ironing board and electric irons and an electric ironer. In another room, an electric sewing machine may be used by dormitory occupants for “odd jobs.”

The atmosphere of the dormitory is homelike, with principles of self-governing predominating through an organization of students who formulate a program of social and other activities for the building. 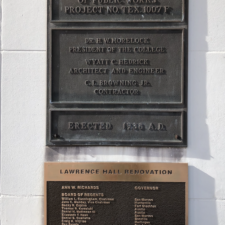