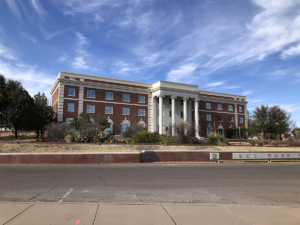 A modern state institution of higher learning in the far-western “Big Bend of Texas,” Sul Ross State College faces its 20th anniversary in 1940 with a college plant and campus of first rank among state educational centers Opening of a new $150,000 PWA dormitory for women this year has brought to completion a $400,000 Federal improvement program.

Largest of new structures on the campus is the women’s three-story dormitory.

Six concrete tennis courts, with a seating capacity of 1500, a bowling alley and athletic clubhouse, a greenhouse, a fence around the athletic field and numerous landscape projects of the Public Works program are additional improvements.

In 1934 the El Paso Herald-Post wrote: “To beautify the hillside setting of the college buildings the campus has been terraced, the driveways paved and large beds of desert plants set out. All labor for the projects was supplied through the local offices of the CWA and the FERA.”

While many of the developments, including the men’s dormitory, band home, and “rock cottages,” are no longer extant, several of the projects are still in use today.