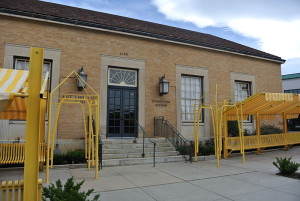 The May 7, 1936 edition of the Sugar House Bulletin reported a “rousing talk” by local Postmaster Smoot that was a ‘call to arms’ to members of the newly-formed Sugar House Rotary. Mr. Smoot stated that a new federal building was seriously needed to handle the sixteen percent increase in mail during just the preceding twenty months. …

On March 19, 1938, the Salt Lake Tribune announced that the House Appropriations Committee had approved $150,000 for a new Sugar House Postal Station… Two sites were under consideration for the postal station: one south of the existing 1928 Sprague Library … which was eventually purchased in May 1938.

The building was designed by Louis A. Simon, Office of the Supervising Architect and the architect of record for several contemporary postal facilities in the state. W.J. Dean and Sons secured the contract for the construction for $78,276 and construction began in 1939. The building was completed in 1940 at a final cost of $85,976 and the Salt Lake Tribune announced that a crowd of 2500 people attended the dedication ceremony on November 16, 1940. According to the post office inspector in charge of the Denver district, “very few places the size of Suaar House have been granted a substation as large as the one now being dedicated.” The new station began operation the following Monday, November 18, 1940.

The building adequately served the community until 1962 when a two story addition was built on the east end of the building to house a variety of staff and mechanical spaces and an improved loading dock facility. The U.S. Postal Service continued operation of the building until it was replaced in 1991 by a new building located about two blocks to the north.