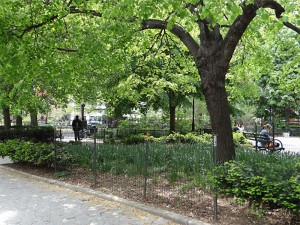 On October 1, 1936, the Department of Parks announced the completion of significant developments in Stuyvesant Square park:

“At Stuyvesant Square Park the south half of the rectangular section west of Second Avenue and bounded by Second Avenue, East 15th Street, Rutherford Place and East 17th Street has been redesigned and reconstructed, with the exception of the central portion, comprising eight percent of the west half of the park. The area developed includes wide, semi-circular walks, with continuous rows of benches.”

In December of the same year, the Department announced further work on the northeast section of the square, including the construction of semi-circular walks and concrete benches. In April 1937, the Department announced that the northwest section had been “rehabilitated” and that, in the southwest section, “the octagonal shaped brick comfort station opened temporarily for public use last summer is entirely completed and reopened.” In October 1937, a final section of the park was similarly rehabilitated.

Today’s Parks site sums up all this work, saying the “19th-century plan was modified by landscape architect Gilmore D. Clarke, and comfort stations and other amenities were built. The park reopened in 1937, looking much as it does today.”

In 1941, the Department of Parks announced the WPA’s installation of a sculpture of Peter Stuyvesant that had been commissioned by Robert Moses and the Parks Department in 1936. The sculpture was created by artist Gertrude Vanderbilt Whitney. The sculpture was first exhibited at the World’s Fair before being installed in Stuyvesant Square. The WPA a “new 15′ x 30′ offset with a semicircular bay” to house the sculpture.

Project originally submitted by Evan Kalish on May 14, 2014.