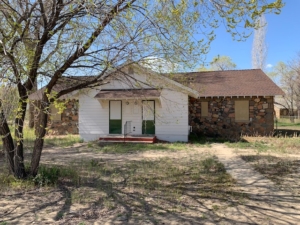 Residential housing for employees of the Stewart Indian Boarding School Staff and Civilian Conservation Corp – Indian Division (CCC-ID) was acute by the late 1930s. Off-site rental units in Carson City and Reno were expensive and hard to find. Stewart Indian Agency Superintendent Don C. Foster made several attempts to gain approval for two new cottages for CCC-ID employees and approval finally came after his offer to redirect CCC-ID funds (earmarked for a Walker River project) to the cause. Five cottages (including two duplexes) were built west of the Indian School in the vicinity of Pawnee and Cherokee Avenues. The cottages ranged from 1500-1800 square feet in area. The Stewart Indian School shop teacher and students, and CCC-ID enrollees and staff built the new units.

The residential units (#’s 32-36) were built of native stone to conform with larger Stewart complex. The plans were drawn by Carl Cederstrand of the Bureau of Indian Affairs (BIA) Construction Division and included Cape Cod elements (e.g., white siding, center entrances, and steep roofs). Based on an early request, the CCC-ID may have occupied at least one of the duplexes, using one side for a dwelling and the other for a Carson Agency office. Its assumed that the other three cottage were occupied by employees of the Indian school.

The onset of World War II and the demise of the CCC program halted future construction for many years. Today many cottages are vacant and boarded up. A few cottages are used by non-profit agencies. 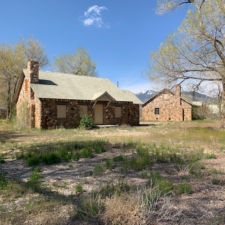