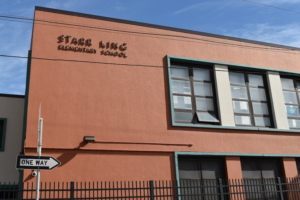 In 1935-36, the Public Works Administration (PWA) paid for the partial reconstruction of a 1913 wooden school building (removal of the 3d floor) and the addition of a new wing that added six classrooms.

“Similar to Patrick Henry School, Starr King Elementary was deemed unsafe due to vulnerability to fire and earthquakes. The scope of work for Starr King [included] removal of the third floor and the construction of a reinforced-concrete addition containing six classrooms. The work was designed by City Architect Charles H. Sawyer and completed in 1935 or 1936.”

The follow-up to the story end quite differently from Patrick Henry School, however: “Using bond funds approved in 1948, the Board of Education built an all-new Starr King Elementary School campus at 1215 Carolina Street, next to the Potrero View Housing Project, in 1954-58. Around the same time, the old Starr King School was demolished and replaced by [the nearby] Buena Vista Elementary School (now Bryant Elementary School). No part of the PWA [Starr King] school building survives today.”

This project was part of a sweeping effort by the PWA and the State of California to rebuild schools in the wake of the Long Beach earthquake of 1933, which had devastated so many school buildings in Southern California.  The Field Act of 1933 upgraded seismic codes, forcing districts around the state to rebuild schools. 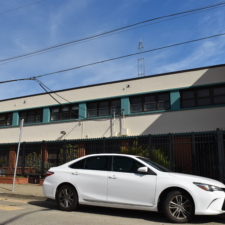