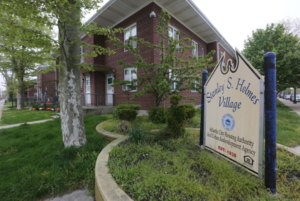 Stanley Holmes Village (a.k.a. Stanley Village) is a 420-unit low income housing project on Adriatic Avenue that was built in 1937 and expanded in 1951. Its the oldest public housing complex in New Jersey.

Atlantic City was the first municipality in New Jersey to provide public housing to its constituents. The movement to establish public housing was initiated in 1933 with the organization of the Civic Committee for Better Housing – headed by Walter J. Buzby; Mrs. Warren Somers, Commissioner of the State Housing Authority; Naomi Craighead; Robert A. Watson, Manager of the Southern Division of the State Housing Authority; B.J. Dudnick, State Housing Authority; and Timothy J. Kelly. The Civic Committee for Better Housing produced a social and economic study of housing in the City, and enlisted the support of the Atlantic City Real Estate Board and the Chamber of Commerce to further its platform. The Civic Committee for Better Housing was successful in championing its cause; in October of 1934, a site bounded by Adriatic, Baltic, Kentucky and Illinois Avenues was identified for the creation of Atlantic City’s first public housing complex. In April of 1935, Mayor Harry Bacharach condemned the buildings that existed on the proposed site. The thirteen property owners were each paid $246,250 and the one hundred and sixty families living on the site were relocated to other residences. The architects J. Vaughn Mathis, Herman Turon and Vivian Smith were hired to develop the city’s first public housing buildings – Stanley Holmes Village. In November of 1935, the city held ceremonies, attended by Governor Harold Hoffman with principal speeches by Mayor Charles D. White, to commemorate the demolition of the dilapidated buildings that once stood between Adriatic, Baltic, Kentucky and Illinois Avenues. Foundations for Stanley Holmes Village were laid in March of 1936, and – at that time – 339 individuals applied for residency. On April 16, 1937 the first tenants moved into their homes. In 1937, Stanley Holmes Village consisted of sixteen, two- and three-story brick buildings grouped around two landscaped areas that formed eight quadrangles. In 1951, an extension built an additional fourteen buildings. A large bronze plaque dated 1949 is located on the administration building.

According to a 1937 Architectural Forum listing of PWA Housing projects, the Holmes Village is listed as 277 living units, 8 acres, Cost was $1,700,000, the architects were Mathis, Smith & Turon, and contractor was John McShain, Inc.

“Back in the 1950s when my parents were a young couple living in the Village, rarely was it called “Stanley Holmes Village” as the Press usually refers to it. Then, it was a refuge for low-income families, the elderly and disabled veterans in need of decent and affordable housing. Many young couples got their starts there and were proud to do so. My mother recalls how maintenance delivered flower seeds to each household in the spring so that everyone could have a little garden by the time summer arrived. I remember being told not to step on those colorful gardens when we swung on the chain fences that surrounded each one.”

After numerous complaints from residents, a $450,000 planning grant from the federal Department of Housing and Urban Development was awarded to the Atlantic City Housing Authority in December 2020, to create a redevelopment plan for the village and the Westside neighborhood. According to Brian Crosby the property coordinator, the transfer of residents will take place over a 7 year period into newer houses while the original buildings are demolished. He described their condition as old and worn and the wiring and plumbing in bad need of upgrading.

This author thanks Mr. Crosby for providing the photo and the update of the complex. 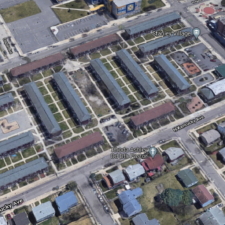 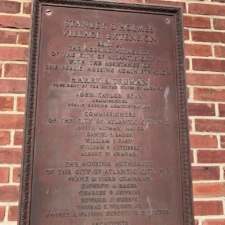