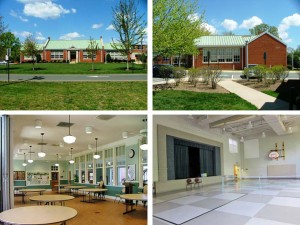 “Built in 1939 during the Great Depression by the Public Works Administration on eight acres of land purchased with private donations from black citizens who had formed a “county league” for that purpose, the Stafford Training School was the only African-American high school in Stafford County during the era of segregation. Today it is the most significant site in the Fredericksburg area to interpret the struggle for desegregating Virginia’s public schools. In 1960, students from the training school were the first to attempt school integration in the area by attending the all-white Stafford County High School. That attempt failed, but it was followed successfully in 1961 and 1962 at the high school. These actions effectively contributed to changing public education in the Commonwealth of Virginia and to expanding the civil rights of African Americans in the U.S. The building, under continuous use since its construction, underwent a major restoration in 2005; the property retains a circa-1940 baseball field.”   (http://www.dhr.virginia.gov)