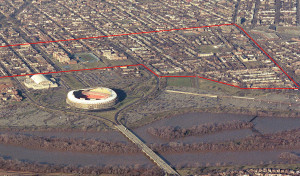 The DC Armory was paid for by a congressional appropriation (part of the District’s general funding bill for fiscal year 1940), and probably also through local revenue sources such as real estate taxes and parking fees. The DC Municipal Architect’s Office was responsible for planning and supervising the construction. The Armory was completed in 1941 at a total cost of about $1.5 to $2.5 million.

One year after the Armory opened, the New Deal’s Federal Works Agency (FWA) approved funding for a recreation area in the “stadium-armory area at the end of East Capitol Street” (Evening Star, 1942). It was reported that this and “other areas will provide new tennis courts, softball and baseball diamonds and facilities for other types of athletics” (Ibid.). The East Capitol Street recreation area was planned to be substantially completed in 1943.

A review of newspaper archives (including, but not limited to the articles in the source list below) suggest that this FWA-funded, East Capitol Street recreation area covered at least 30 acres, and existed from about 1943 to 1959. Then, from 1959 to 1961, a new D.C. Municipal Football Stadium was built, and the stadium and its parking areas seem to have taken up most of the FWA recreation land. The football stadium was eventually re-named Robert Fitzgerald Kennedy (or “RFK”) Stadium.

Today, there are small recreation spots near the DC Armory–such as a skate park and a soccer field–that may have some relation to the 1943 FWA project. And other attractions nearby, for example, Langston Golf Course, Kingman and Heritage Islands Park, and Kingman Lake had been part of DC’s long-standing goal to develop the area around the Anacostia River and East Capitol Street into a large recreational venue.

Additionally, the DC Armory and the adjacent FWA recreation area were part of a wide-ranging and well-funded New Deal effort to provide Americans with more opportunities for sports, exercise, and leisure.