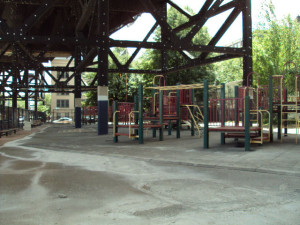 St. Mary’s Playground in stretches along Smith St. between Huntington St. and Nelson St., and Nelson St. and Luquer St. in Brooklyn. It sits at the border of three neighborhoods: Gowanus, Red Hook and Carroll Gardens. The NYC Parks site explains the origin of the playground: “The two parcels of land for this park were acquired by the New York Department of Transportation in 1934 as part of President Franklin Delano Roosevelt’s (1882-1945) Works Progress Administration’s urban revitalization initiative. Originally they were to be utilized for the new Gowanus Expressway (1941), but many in the community thought the land straddling Nelson Street would be an ideal site for a playground.”

The playground was opened by the Department of Parks in 1936, along with six other WPA playgrounds in Brooklyn. In the press release announcing the opening the following day, it was actually listed as two playgrounds, constructed side by side: “at Smith Street between Luquer and Nelson Streets there will be kindergarten swings, see-saws, a jungle gym, a sand table and six play houses; at Smith Street between Nelson and Huntington Streets there will be four shuffle-board courts, three horseshoe courts and one basket-ball court…”

St. Mary’s playground was further developed in the 1960s and 1970s. As of September 2016, it had been closed for some time, but was in the process of undergoing a major reconstruction to be reopened, most likely in 2017 and 2018.