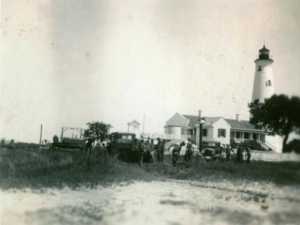 CCC workers constructing the road to the St. Marks Lighthouse

What is today the St. Marks Wildlife Refuge was originally established in 1931 as the St. Marks Migratory Waterfowl Refuge, a key link in protecting the Atlantic flyway. It cover over 70,000 acres spread out between Wakulla, Jefferson, and Taylor counties in Florida and includes about 43 miles of the Gulf Coast.

In the summer of 1933, Civilian Conservation Corps (CCC) Camp BF-1 was established near Newport to begin work on various improvements to the refuge under the auspices of the Bureau of Biological Survey (from 1940 the Fish & Wildlife Service). It was one of the few all African American camps in the CCC. The camp was briefly closed in 1934 due to a malaria outbreak and then relocated near Woodville, Florida.

Between 1934 and 1942, camp workers made a number of improvements at the refuge, including constructing Lighthouse Road, building earthen levees to create large water impoundments for waterfowl, and clearing more than 20 miles of firebreaks. They also constructed a diversion dam, two lookout towers, dwellings and other camp buildings, and strung dozens of miles of telephone and electrical wires on poles cut on the refuge. From the camp’s base in Woodville, the workers also assisted private owners in fire control and forestry replanting.