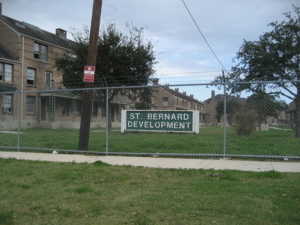 St. Bernard Projects were constructed 1940 as one of New Orleans’ “Big Four” high-density urban public housing projects. Initially comprised of 744 units in 74 buildings constructed on 30.9 acres, the project was bordered by St. Bernard Avenue to Gibson Street and Senate Street to St. Denis Streets. Architects Herbert A. Benson, George Christy, and William Spink designed the buildings “to echo the brick townhouses of the Vieux Carre” (Historic American Buildings Survey, 1933). Similar to other public housing units in New Orleans, they reflected elements of the period including porches and balconies with metalwork and canopies. Unlike other units, the architects used double windows in the window spaces extensively throughout the project. Fourteen buildings were demolished in 1946 following a gas explosion.

Renovation of interior and exterior had begun just prior to Hurricane Katrina in 2005. Although St. Bernard project faced no structural failure after Hurricane Katrina, architectural historians and preservationists were unsuccessful in convincing local authorities to renovate and utilize existing buildings. However, “at least one original structure, or ‘legacy building’ as they became known, was retained at each site” (Alford, 2012, as cited on Tulane School of Architecture, 2015). An extensive review of Google street maps indicates there are three original buildings from the St. Bernard project: one-story building most likely the former administration building, now housing Educare, and two rowhouse former residential units adjacent on Milton Street, which are part of a park site. The one-story building appears in street images to retain the identification plaque at the front entrance.