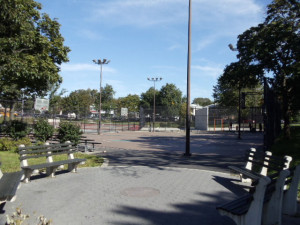 The land for St. Albans Memorial Park in Queens was first acquired by Parks in 1914 and received its current name in 1932. A Department of Parks press release announced the opening of a new playground in St. Albans Park on July 17, 1934. At that time, the playground contained “facilities for softball and basketball, besides see-saws, swings, horizontal bars and ladders. Here too, benches and shade trees are part of the layout.”

Although the release does not mention the WPA or other New Deal agencies, researcher Frank da Cruz explains here that almost all New York City Parks Department projects between 1934 and 1943 were carried out with New Deal funds and/or labor, and that after April 1935, the WPA quickly became the main source of this support.

There is still a playground, including basketball courts, in the location described in the press release. There are now tennis courts and handball courts as well.

Another section to the west of the existing park across Merrick Boulevard was acquired by condemnation in 1936. In September 1941, Parks announced the completion of two new softball diamonds on this site, as well as “portable steel bleachers,” “concrete curbs and stairway, drainage, drinking fountains, benches, topsoil, seeding and shrub planting.” The press release concludes that “These projects were constructed by the Work Projects Administration from plans prepared by the Department of Parks.”