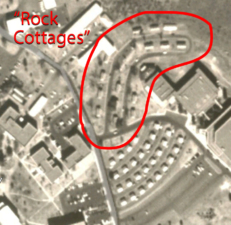 A series of 14 stone cottages, later known as the “rock cottages,” was among the multiple residence projects constructed at Sul Ross State University as a result of New Deal efforts by way of the Public Works Administration (PWA). The cottages were built as part of a larger men’s dormitory project that was the construction of a larger dormitory and band home. PWA supplied a $36,000 loan and $15,886 grant for the project, whose total cost was $57,406. Construction began in May and ended in December 1935. PWA Docket No. TX 5605.

Per the El Paso Herald-Post:

Built as a part of the same PWA project in 1936 are 14 student cottages of native stone which provide accommodations for 56 students. Each cottage is equipped with two bedrooms a kitchenette. shower-bath. built-in dressers and linen closets.

The structures could be found on the east end of campus. However, in 2005 the university announced a plane to demolish 41 of the 44 structures, including all the stone cottages. In place of the stone cottages was a $20 million housing complex with 600 beds: Lobo Village Housing Complex. The Residential Living Office and south building of the complex occupy the space where the “rock cottages” used to be. Indeed, most of the brick cottages made way for a parking lot expansion; only three remain.