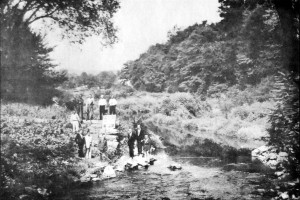 “WASHINGTON, (AP) – The Works Progress Administration advised Senator W. Warren Barbour, N.J. Rep., today that applications from Morristown, N.J., for allocations for the proposed Speedwell dam and Speedwell Lake bottom construction projects had been approved here and treasury warrants signed for release of the money….The two Speedwell Lake projects would cost $49,614, of which $43,429 would be financed Federally and $6,185 by the town of Morristown. One job stipulates the construction of a completely new concrete dam above the Whippany River bed, and it would mean virtual recreation of the once beautiful Speedwell Lake. As a regular unit in the towns’ park system, the lake would be a center for general recreation. Town Clerk Nelson Butera pointed out this morning the body of water could be used as another swimming place similar to the one at Burnham Park. Boating and fishing would also be allowed on Speedwell Lake, he predicted. According to the terms of the projects approved by Washington today, remains of the former stone dam would be removed. The submerged shores and channel slopes would be riprapped, the shore roadway would be regarded, the Whippany River channel would be widened, and vegetation and stumps on the bottom would be removed. Butera suggested today the improvement of Speedwell Lake be followed by application for another WPA project to rejuvenate Pocahontas Lake. He indicated the job would fall within the scope of the Works Progress Administration, since the principal expenditure at Pocahontas would be for labor rather than materials. Swimming, boating, and fishing would be possible there after complete cleaning out of vegetation and some grading and trimming, he said. Speedwell and Pocahontas Lakes at present constitute town eyesores for travelers coming in from the West both on Lackawanna trains and in cars along Speedwell avenue, he observed.” (Feb. 6, 1936)

Area of work done by the WPA