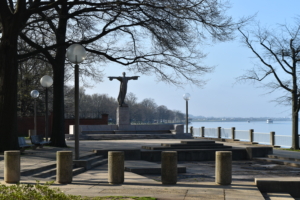 The Washington Channel is a two-mile long body of water that sits between East Potomac Park and the Southwest Waterfront. There had been a decades-long attempt to improve and modernize the area, but little had been done before the New Deal redeveloped the entire place from 1935 to 1943.

Several pieces of New Deal legislation were needed for this massive project, including the River and Harbor Act of 1935 and the War Department Civil Appropriations Act of 1939.  These granted approval and provided initial and supplemental funding for a grand modernization and beautification of the Washington Channel and Southwest Waterfront. This construction project was to cost upwards of $1.6 million (with the DC government contributing $389,000) and take eight years to complete. Some small-scale work was also done in the area by the Works Progress Administration (WPA),

By the mid-1930s, the waterfront had fallen into complete disrepair. Evening Star journalist William A. Millen described the scene: “One taking a stroll along the Washington Channel water front… is impressed with the tumbledown condition of the piers and the buildings… The place looks as if it had been struck by an earthquake or a hurricane and the results left so that men might view the aftermath” (March 7, 1937).  Another Evening Star article explained that “yachtsmen have shunned Washington as there is now no adequate facility for handling craft here. At present, they have to moor out in the Washington Channel and the wharves are considered so dirty that many of the owners of the shining white ships are loath to tie up their spotless craft alongside the worn out piers” (June 24, 1937).

The Washington Channel and Southwest Waterfront project was to be done in accordance with the L’Enfant plan for the city’s overall design and to include the following components (planned or proposed): Dredging to deepen the channel; several modern yacht basins; new piers for recreation, commerce, and first responders; landscaping; a riverfront boulevard with ample parking; demolition of old buildings; and construction of colonial-style buildings, for example, pier head houses and marina service centers. (The existing, colonial-style Municipal Fish Market was to be left undisturbed.)

Federal ownership of the waterfront area simplified the planning process, and upon completion many of the new facilities were to be leased to private companies offering services to the government or general public.

Work began in April 1938, supervised by Major Walter Luplow of the U.S. Army Corps of Engineers. Other engineers and architects included E.A. Schmitt, Charles A. Chaney, and John P. Bills. The Diamond Construction Company and the A.M. Hazell Company were two of the major construction firms contracted to do the work.

The first three years of the project saw great improvement to the area and generated much excitement. The Evening Star highlighted a “New ‘Face’ for Washington Waterfront” (September 15, 1940) and declared the district’s new yacht basins to be “among the finest in America” (April 4, 1941). Also completed at the end of 1941 were a service center building for Yacht Basin No. 1 and a large commercial pier (“Pier No. 5”).

Unfortunately, America’s entry into World War II slowed down the channel and waterfront project and eventually brought it to a full stop. After the war, the project stagnated and was limited mostly to intermittent planning and hopeful preparation. Finally, in 1977, Congress de-authorized the project altogether.

Only about a third of the Corps of Engineers’, New Deal era project to modernize and beautify the channel and waterfront was completed. Nonetheless, nearly $4 million seems to have been spent. Still, the work supervised by the Corps, in addition to smaller projects of the WPA and DC government (utilizing federal funds), significantly enhanced the area, making it more welcoming to recreational boaters, suppliers of goods, and the water tourism industry.

In the 1950s, the Southwest Waterfront was the target of a large urban renewal project that cleared the tenement housing in the area and displaced most of the low-income residents. Notably, Alley Dwelling Authority director John Ihlder, who partnered with the WPA on the London Court project in 1936, emerged as a strong critic of redevelopment efforts in the 1950s.   Today, the Southwest Waterfront is several years into another large-scale redevelopment which includes “new residential, hotel, office, retail and entertainment space” (Washington Post, March 10, 2021). 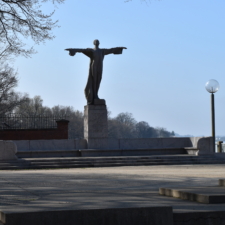 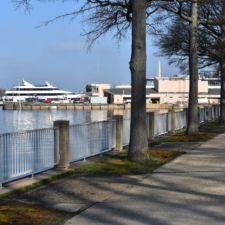 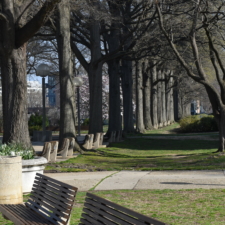