From the Wisconsin Historical Society entry on the beach house:

Southport Beach House, like most of Kenosha’s park structures, was the product of Roosevelt’s Works Progress Administration (WPA).

The Southport Beach House, begun in 1936, used recycled materials to cut costs. This way, rather than paying for new materials, the city paid workers to tear down condemned buildings as well as build new ones. The beach house uses luxurious slate, stone and marble materials salvaged from the old Kenosha post office, which would have been otherwise unaffordable.

The beach house is an eclectic mix of popular architectural styles. The east side combines Tudor window details with Mediterranean arches, while the symmetry and mass of the west side show Classical Revival influences. The interior features an incongruously modern Art Deco ballroom with abstract, geometric ornamentation executed in paint, raised plaster, and aluminum banding applied to the walls and ceiling.

From a contributor involved in historical preservation efforts on the site:

Looking for solution [to erosion problems], finally in the 1930s the city was introduced to the marine engineering work of Sydney Makepeace Wood. Wood researched and studied permeable jetties to trap silt, which would create beaches that would act as a buffer for the pounding waves when a big storm would hit the coastline. The city and Wood were so confident about the success of the groins, or jetties, that with funds provided by the Works Progress Administration, they built the Southport Beach House almost simultaneously on the newly created beach – sinking pilings deep into the sand. They did this with the help of the WPA. The 12 groins the city and WPA built immediately stopped the erosion problems the city was having and Kenosha became the envy of many other western Lake Michigan cities who came to see Kenosha’s success and repeat it on their shores. The Southport Beach House became the crown jewel of Kenosha’s shoreline. Crowds of swimmers and bathers came to the shore to enjoy the lake and it’s beautiful swimming areas; and the beach house enabled them to change and store their belongings, shower, and have a bite to eat in a beautiful setting.

The project was undertaken by the Works Progress Administration (WPA) in the mid 1930s, giving work to many of the unemployed city workers who had previously been employed in Kenosha’s many industrial manufacturing businesses, such as American Motors, American Brass, Jockey, and Snap On Tools. Workers constructed the groins right on the shoreline: cement was poured into forms, hardened, and lifted by cranes and stacked from the shore out into the lake. They were built to be permeable structures allowing water to pass through so that a good percentage of the silt would drop. Sydney Makepeace Wood nicknamed them “beach creators”; the locals soon just thought of them as piers or jetties for fishing.

The Southport Beach House was built between 1936-1941. To keep men working and families fed they worked year round through freezing winters. It is two stories on the eastern beach side and a separate entrance to the one story ballroom on the west side entrance to the park. The bottom floor was built to hold changing rooms, a concession stand, and a lifeguard rescue station with boathouse. Kids would arrive on their bicycles, largely without parents, and receive a basket and an elastic bracelet for identification. They would change their clothes and deposit their belongs in their basket which would be stored by an employee from the concession stand. They would swim between the jetties attended by lifeguards hired for the summer by the city. The concession stand was stocked with candy bars, ice cream and sodas. The changing rooms were open to the sky with two story walls on all sides, so the second floor wings on the west side upstairs are formed by the walls of the beach level changing rooms.

The upstairs interior is in the elegant style of art deco and still in beautiful condition. The beautiful hardwood floors show off the artistry and attention to detail of the workers. The large upstairs room holds about 200 people comfortably and therefore has held many weddings and receptions. There is a stage for musicians and on the opposite side of the room a kitchen area with a pass through. The windows open to the swimming area on the east. The entrance has a men’s and women’s bathroom to either side and a coat room for guests.

213,000 cream city bricks were used to build the facility and they were salvaged from the Bain Wagon Company offices according to the architect who worked for the city Planning Department. A Kenosha News story in 1974 quoted architect Chris Borggren, then 77 years old: “It was during the Depression and we were trying to develop WPA projects. Remember the old Bain Wagon Works? Well they went out of business because no one was buying wagons anymore. We used the brick from their building and the old slate from a roof from the old Chicago – Northwestern Depot in Racine….”

Currently citizens from Kenosha are trying to bring the Southport Beach House back to its former glory. It suffered from years of dormancy on the beach level after the Army Corp of Engineers filled in the permeable groins in about 1972 causing the swimming area to become stagnant and putrid The severe winters have had an effect on the exterior but poor repairs by city employees has also caused deterioration. Graffiti was covered over with paint that caused spalling of brick; and cement was used for some tuck pointing, causing more problems. The downstairs changing room area was locked up and fell into disrepair. Overall the building is in great condition and it has been up to local historic preservationists to convince the city with repair to the brick on the eastern wall, new windows on the east face, and some structural damage to the old changing rooms it can again be the jewel of Kenosha’s coastline. Currently preservationists are working very hard to get the city to repair and maintain the slate roof rather than replace it with a new asphalt shingle roof. 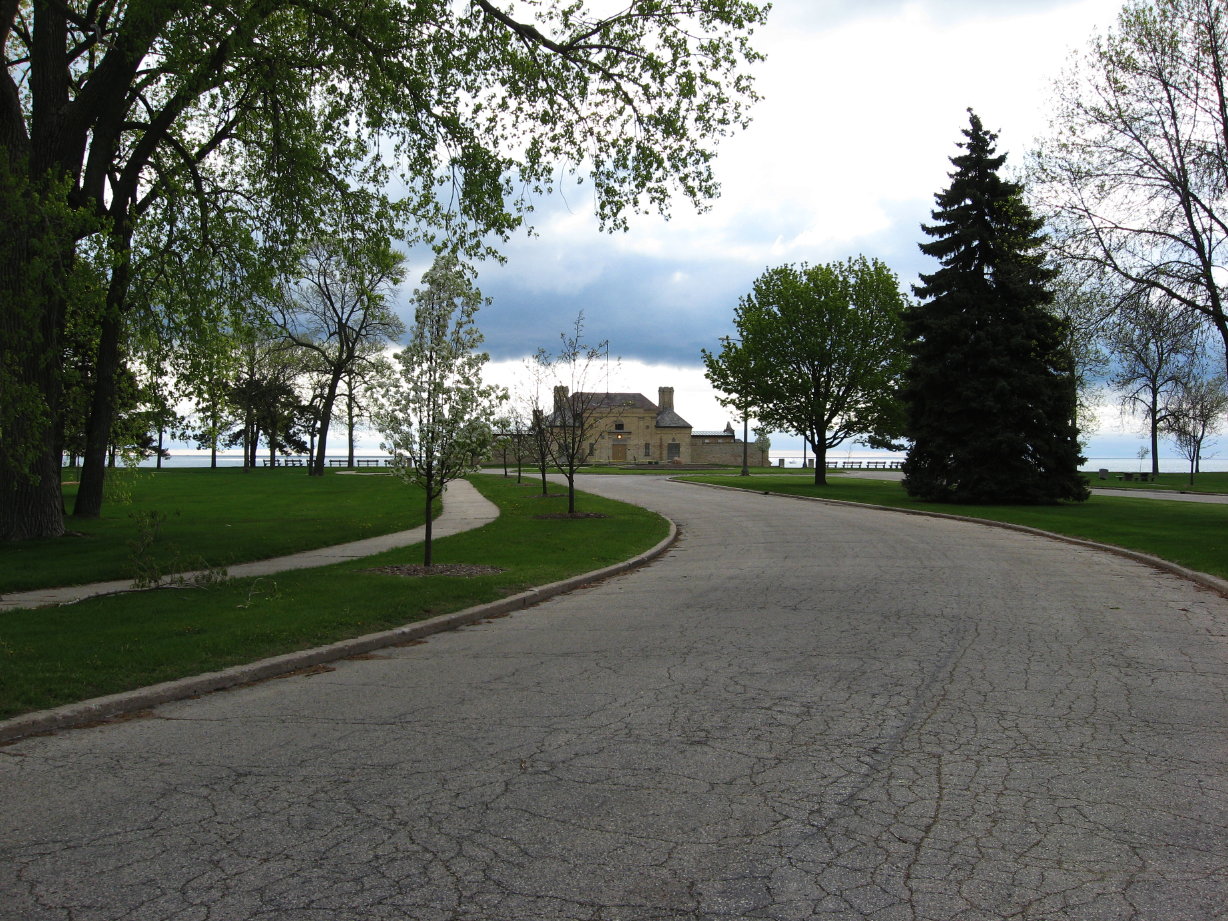 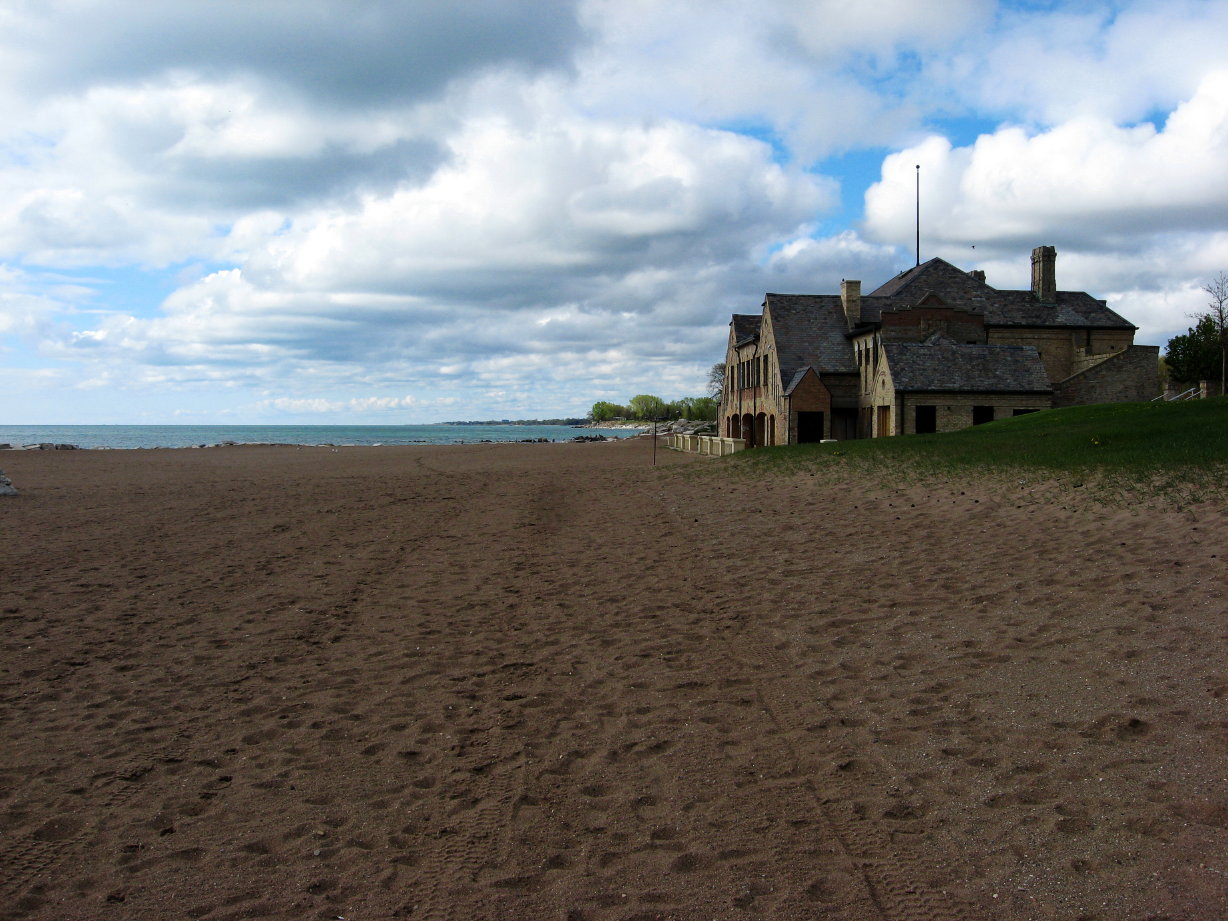