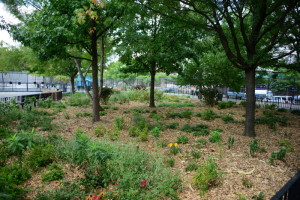 One of these five playgrounds was the South Pacific Playground. It is still extant.

Although the 1937 press release does not mention which New Deal agencies were involved, researcher Frank da Cruz explains here that almost all New York City Parks Department projects between 1934 and 1943 were carried out with New Deal funds and/or labor, and that after April 1935, the WPA quickly became the main source of this support.

In December 1941, the Department of Parks announced the completion of another extension to the playground, this one explicitly completed by the WPA:

“The addition to the playground, approximately three quarters of an acre in extent, has been developed as a play field by the Work Projects Administration from plans prepared by the Department of Parks. The asphalt surfaced enclosure, bordered by block paving, trees and benches, contains a softball diamond and combination volley ball and basketball court… [as well as] new concrete street sidewalks, drainage, irrigation and park lighting, 25 Norway Maples were planted around the chain link fence enclosure.”