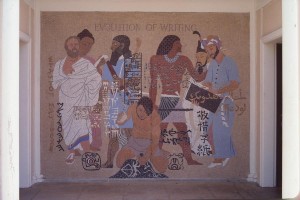 The mosaic is situated in the entrance to the building (formerly the South Gate Public Library). It has recently been designated a culturally significant landmark.

“The tile mosaic entitled Evolution of Writing was created by Stanton MacDonald-Wright during his employ with the Federal Works Progress Administration (WPA). Mr. Wright served as WPA Art Project Director for Southern California and later as technical advisor for seven western states. It was during his position as technical advisor (approximately 1938–1942) that the South Gate mosaic was created.

During his affiliation with the WPA (1935–1942), Mr. Wright became interested in new techniques for architectural decoration and designed murals and mosaics for several Southern California communities including South Gate in Petrachrome, a process he invented. In the Petrachrome process, aggregates of colored stones and coloring matter are added to Medusa cement, which is then cast on extruded metal lath in pictorial segments, polished and set in the wall.