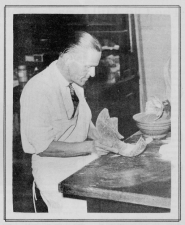 In 1936, Work: A Journal of Progress reported that several dozen Works Progress Administration (WPA) workers were assigned the role of assisting archaeologists, anthropologists, biologists, and other scientists in sorting the backlog of contributions to the Smithsonian Institution museum and other supportive roles. This kind of “service work” to museums and libraries was quite common in the New Deal, so we mention it here because the Smithsonian is such a central public institution in the nation’s capital.

From the story in Work:

“BEHIND the scenes at the Smithsonian Institution, where the painstaking work of research and the classification of specimens proceeds constantly, a large force of WPA workers fights the ever-present threat of deterioration which would cheat the scholars of tomorrow from one of the world’s most complete scientific collections.

Bones, skulls, fragments of pottery, and thousands of other items of scientific and historical importance are received yearly by the Smithsonian for classification and preservation. With this steady influx, examples and models of the latest brain children in modern industrial science arrive, waiting ironically for the passage of time to transform them into specimens of historical value.

With the urgent need for supplementary aid at the Smithsonian, 78 men and women from WPA rolls were assigned to assist the regular staff in performing routine duties connected with the arrangement and preservation of specimens belonging to the National collections.

Today, as this sizeable force works elbow to elbow with some of the world’s famous scientists, important chapters are written in the archives of science. As Dr. Ales Hrdlicka, curator of Physical Anthropology, returns from the Aleutian Islands with startling additions to the famed collections, he finds his assistants have been directing WPA workers in labeling hundreds of skulls from the races of the world. Counting his grand total, Dr. Hrdlicka finds 16,000 specimens of skulls uniformly reposing in study and exhibition trays. In other trays, fragments of skeletons, hundreds of years old, await classification and labeling.

In Smithsonian’s library, America’s most complete collection of scientific information, the WPA has stepped forward to assist in the vast assignment of cataloging all divisional libraries of the Institution, a total of 850,000 volumes. There are 45 libraries in all, in- cluding sectional libraries, the largest being the 550,000 volume deposit in the Library of Congress. These workers are principally employed in arranging and cataloging books so that these may be available for immediate use. Since thousands of tomes are in foreign languages, this project has called for workers possessing a knowledge of foreign tongues. The work of cleaning, preserving, and binding has given others employment in this division.

New talents are born among the ranks of the WPA workers at Smithsonian. A former bond salesman and an erstwhile electrician have become surprisingly adept in the specialized art of restoring early American pottery. Working under William H. Egberts, Anthropology Preparator, these two men are piecing together bits of pottery into vases and urns coming to them often in scores of pieces. Using a special cementing agent and plaster of paris, ancient ceramic products are re-assembled much like a jig-saw puzzle, the design serving as a guide. The completed articles will furnish aid in the preparation of another chapter in the history of aboriginal America.

Dr. Frederick L. Lewton, curator of textiles, is directing WPA craftsmen in the repair of thousands of inventors’ models, a transfer from the Patent Office. Dusty and with many of them badly damaged in moving, the tiny models, an Odyssey of American mechanical trends of the last half century, are being repaired, cleaned, classified and stored for future reference and comparison.

A collection of 20,000 specimens of textiles and 9,000 specimens of various woods are keeping other WPA workers busily employed. Periodically these perishable articles are fumigated and cleaned to discourage the slightest attack of parasites. Incoming contributions from hundreds of textile and lumber mills from all parts of the world are constantly being classified and stored. As in other Smithsonian departments, it is possible for Dr. Lewton to compare immediately a sample of any wood or cloth to determine its pedigree, composition, and relationships.

Under Dr. E. A. Chapin, curator of the Division of Insects, WPA workers are helping condition the immense Smithsonian collection of over 4,000,000 in- sects. Constant additions and replacements, coupled with the delicate job of preserving specimens, creates an immeasurable assignment for Dr. Chapin and his staff to perform without supplementary aid.

Dr. W. R. Maxon, associate curator of the Division of Plants, is using 14 Works Progress employees to aid in an analysis of the National Herbarium, a collection of nearly 2,000,000 plant specimens. Some workers are assisting the regular staff by typing manuscript notes, eventually to be used in publications; others are transcribing original descriptions to herbarium sheets. Three supplementary workers are aiding the research staff in editorial work, principally in connection with the final revision of an ex- tensive bibliography of the Botany of Eastern Asia.

The endless job of conditioning specimens to resist the ravages of time and deterioration can well be appreciated by considering the proportions of the aggregate collections of the Institution. There are four huge buildings virtually filled with exhibition and study collections. But those acquisitions which meet the spectator’s eye at the Smithsonian are only about one-tenth of the entire collection.

The remainder, which are of great scientific value, are systematically stored for study purposes. Exhibits are viewed on an average by a throng of nearly 7,000 persons daily, roughly 2,000,000 a year.

Tasks at the Smithsonian are not confined to research and preparation of exhibits. Thousands of pieces of correspondence pass to and from the departments each month, asking and answer ingscientificquestions. This constitutes another phase of the Institution’s activity for “the increase and diffusion of knowledge among men”.

Assistance from the Works Progress Administration has had a two-fold benefit, according to John E. Graf, of the National Museum. An immense volume of arrearage work has been accomplished, and the time gained by the regular staff in being relieved of a great deal of purely routine work has greatly increased their freedom for more important duties of a scientific nature. These wide spread benefits are found throughout virtually every department. General handy-men, typists, statisticians, and scores of other types of helpers have bolstered the staff.”