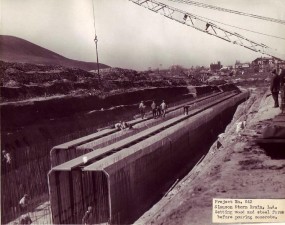 The Slauson Ave. Storm Drain in Los Angeles is one of a number of infrastructure projects undertaken with New Deal aid and Works Progress Administration (WPA) labor in Los Angeles.

Excerpt from a 1939 WPA publication, courtesy of the Los Angeles Library (Connolly, Donald H. and G. I. Farman. Report of Accomplishment of the Operations Division. Works Progress Administration, Southern California. January 1, 1939).
“The Slauson Avenue, Santa Barbara Avenue and Vernon and Vermont Storm Drains, Work Projects No. 642, 9736 and 1508, sponsored by the City of Los Angeles, are all units of the extensive Slauson Avenue Storm Drain System, which has a drainage area of approximately 10,000 acres, roughly bounded by Jefferson Street on the North, Manchester Boulevard on the South, Figueroa Street on the East and the North South divide of the Baldwin Hills on the West.
The main conduit which has an outlet capacity of 2,000 second feet discharges into Ballona Creek [also a New Deal Project], north of the Baldwin Hills. From this point the drain follows the natural channel, traversing the low swampy ground along the north side of these hills, to the intersection of Santa Barbara Avenue and Crenshaw Boulevard. The main line was originally intended to extend from this point easterly along Santa Barbara Avenue to Ninth Avenue where it turns south along Ninth Avenue, Eighth Avenue, Seventh Avenue and Sixth Avenue to Slauson Avenue.
The unit, known as the Slauson Avenue Drain, Work Project 642, a double barrelled reinforced box section, each barrel 10′ – 6″ x 10′ – 0″ sectional dimensions, extends from the outlet 14,200 feet easterly to the intersection of Crenshaw Boulevard and Santa Barbara Avenue where it connects to a double barrelled 60″ precast pipe conduit, from the south, constructed by the C.W.A. and S.E.R.A. during the years 1933-34.
This first unit was started early in the fall of 1935, and as it was located in an extensive undeveloped area, was of exceptional value, as a great number of workers could readily be assigned to the project. Excavation was started by hand, and at one time the project had an assignment of approximately 6,000 workers, however, the futility of attempting to construct a project of this magnitude by hand was soon apparent, therefore, a few months after the work started, the job was completely mechanized. At one time the excavation was being handled by two 1 1/2 yard draglines with a third dragline used for recasting and a forth for backfill.
The project was extremely well organized and the work was handled as efficiently as a good contract job. One of the most noteworthy accomplishments was the efficiently operated steel plant where day after day 27 tons of reinforcing steel was bent and placed. The usual daily pour of concrete was 420 cubic yards which completed a section 120 feet in length. This unit was completed during the spring of 1937 and work was terminated at this point on account of the high non-labor man month cost of continuing the next unit easterly along Santa Barbara Avenue.
The Santa Barbara lateral, Work Project 9636, was started during the summer of 1938 for the purpose of extending the system easterly along Santa Barbara Avenue to Van Ness Avenue. The lateral was redesigned to carry only this local area and consists of a reinforced concrete box section between Crenshaw Boulevard and Ninth Avenue 7′ wide and 10′-6″ high. At Ninth Avenue the section reduces to a 6′-0″ x 5′-9″ box at Third Avenue. This last section continues to Van Ness Avenue.
The Vernon Avenue and Vermont Avenue Storm Drain, Work Project 1508, extending along Vernon Avenue from Fifth Avenue to Hoover Avenue is also a lateral of the Slauson Avenue Storm Drain System, and outlets at Fifth Avenue into the drain constructed by the C.W.A. and S.E.R.A. which in turn outlets into the Slauson Drain at the intersection of Crenshaw Boulevard and Santa Barbara Avenue. The drain has relieved the residential and business district adjacent to Vernon Avenue from the flooded conditions that prevailed during practically every storm, prior to its completion.
The capacity of this lateral is 325 cubic feet per second. The structure consists of 33,000 lineal feet of reinforced concrete pipe ranging in diameter from 102 inches to 24 inches.
These three units of the Slauson Avenue Storm Drain System have successfully alleviated flood conditions within the drainage area. This is especially true in the highly developed residental district known as Leimert Park where, before the drains were constructed, rains of ordinary intensity flooded an area hundreds of acres in extent.
The estimated total cost of the three drains in the system constructed by the Works Progress Administration is $4,466,941, of which $4,312,144 is Federal Funds. This was divided between the three drains as follows: Slauson Avenue Drain; Federal cost $3,081,237, Total $3,162,593. Santa Barbara Avenue Drain; Federal cost $512,493, Total $549,630. Vernon and Vermont Avenue Drain; Federal cost $718,414, Total $755,718.
Project 642, Average Employed 2,024, Months Duration 17
Project 9736, Average Employed 606, Months Duration 11
Project 1508, Average Employed 563, Months Duration 18″

Project originally submitted by The Living New Deal on May 28, 2010.
Additional contributions by Andrew Laverdiere.

Location notes:
Location approximate, but it seems the drain may extend North along 4th Street.