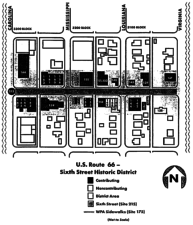 Keystone Lonestar: “The year 1942 brought many improvements to Sixth Street. The brick was overlaid with asphalt and the street was widened. Many buildings had to be pushed back from the road, including San Jacinto Methodist Church. The Works Progress Administration (WPA) funded the building of sidewalks; you can still see the curbs imprinted with the rectangular WPA stamp. A traffic light was installed at the intersection of Sixth and Carolina. The original traffic light is still there, directing traffic over 70 years later.”