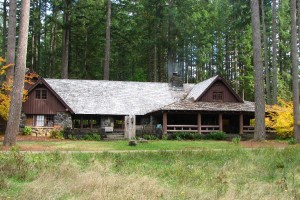 Silver Falls State Park was created by the New Deal in the 1930s and transferred to the State of Oregon for its park system in 1947.  The land was purchased by the  federal Resettlement Administration (RA) c 1935  and the site turned into a recreational area through the work of the Civilian Conservation Corps (CCC) and Works Progress Administration (WPA) between 1935 and 1942.

Silver Falls was an old logging town and the forest had been repeatedly cut over and burned, leaving large tracts of land bare except for stumps.  Some of the area supported farming, but was marginal land.  New Deal farm programs “retired” millions of acres of such land, which the federal government replanted as forest, converted to wildlife refuges or fixed up as parks for public recreation.  CCC and WPA enrollees did the hard work of land restoration in most cases.

In 1935, the federal government decided to make Silver Falls into a Recreational Demonstration Area, one of two on the West Coast. The RA purchased the farmland around the falls and a CCC camp was established to replant trees, rehabilitate the landscape, and make the site usable for the public.

CCC enrollees built several rustic-style park structures, two youth camps that opened in 1938, and trails leading to the nine (ten?) falls along Silver Creek, including bridges, stairways and rock walls. The CCC camp remained at the site until 1942.

WPA relief workers constructed the main concession building, the South Falls Lodge, and Federal Arts Project workers in Portland made a number of myrtle wood benches and tables for the building, many of which remain in use today. The exact dates of the WPA work is uncertain.

In 1947, Silver Falls Recreation Development Area was transferred to the State of Oregon to be a state park.  At the time,  the park covered around 6,300 acres, but successive purchases have increased its size. The South Falls Lodge was operated until the late 1950s, then closed.  It was restored in 1978 and now serves as the visitor information center.

All the historic structures in the park have been added to the National Register of Historic Places. 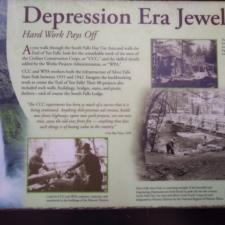 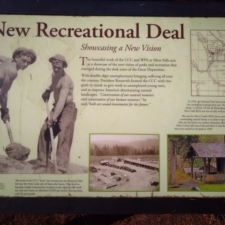 Project originally submitted by Philip Arola on May 6, 2012.
Additional contributions by Richard Walker.