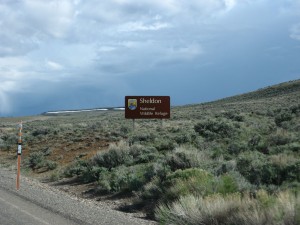 The Sheldon National Wildlife Refuge was established in 1931 in the desert landscape of northern Nevada and eastern Oregon and enlarged by order of President Franklin Roosevelt in December 1936, under the auspices of the Bureau of Biological Survey (Fish and Wildlife Service after 1940).  It now covers 573,000 acres and is part of the Sheldon-Hart Mountain National Wildlife Refuge Complex, which is headquartered in Oregon.  It harbors one of the last reasonably intact examples of a sagebrush-steppe ecosystem in the Great Basin and is known for its populations of bighorn sheep, pronghorn antelope and wild mustangs (since removed).

The Civilian Conservation Corps (CCC) entered the scene in 1935 to make improvements in this, as in most other national wildlife refuges during the New Deal. “Early CCC crews from the Board Corrals camp had concentrated their efforts on the west side of the refuge. From 1935 to 1937, the men constructed a rock-abutted road (State Route 34A) up the mountain to the west entrance of the refugee. The new road, with its 10 percent grade, was a major improvement over the former unreliable route with its 28 percent slope. They also built a more direct road from the Tom Dufurrena Ranch to the refuge headquarters. The Board Corrals crews are further credited with installing 102 miles of telephone line, including a connection to Cedarville, California, and constructing a number of small erosion-control, fencing, and spring-development projects.

Camp Sheldon, established on the McGee Ranch in Virgin Valley, was the second CCC camp assigned to the Charles Sheldon NWR. A detail of men from Company 1915 with its large contingent of Nevada and Utah enrollees first occupied the camp in the summer of 1938. The company had just completed five years of improvements at the Hawthorne Naval Ammunition Depot. In 1939, Camp Sheldon was officially made permanent. Company 5460 soon replaced Company 1915 and remained at Camp Sheldon until the end of the CCC program.

Most of Camp Sheldon’s assignments were now on the east side of the refuge. One of their first tasks was to improve the outlet to the railhead in Winnemucca. This entailed building 55 miles of road between the refuge and Quinn River Crossing. Enrollees also constructed twenty-three dikes and dams in Virgin Valley, and converted and Dufurrena residence into a refuge manager’s headquarters. To accommodate refuge employees, several outlying homesteads were restored, and overnight cabins were built for their use while on patrol. Late improvements at the Virgin Valley Campground, including the stone bridge over the pool in the service yard and bathhouse, are still used by campers.”