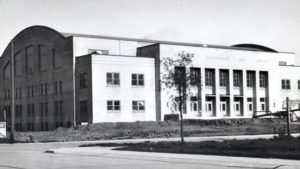 The Sheboygan Armory and Auditorium was built in 1941 by the New Deal’s Works Progress Administration (WPA). The Supervising Architect was Edgar Stubenrauch, based in Sheboygan.

Architectural Features: The two-story structure is representative of the Streamline Moderne/WPA Moderne style. The façade construction consists of precast concrete panels decorated with Art Deco motifs. Typical of the WPA Moderne style, the architectural ornamentation is minimal. Ornamented precast panels are placed primarily at the window headers and the cornice. The structure occupies a site located in the vicinity of Lake Michigan.

National Significance: The structure is a good candidate for National Register of Historic Places registration under Criterion C—”Properties that represent some great idea or ideal of the American people.” The Armory holds national and regional historical significance as a representative New Deal site. The Sheboygan Armory was created through the federally-funded infrastructure-building programs put in place by the Roosevelt Administration to alleviate the effects of the Great Depression. The Sheboygan Armory is a paradigmatic example of the WPA’s work relief program in both scope and architectural style. Wisconsin residents impacted by the Great Depression were recruited by the WPA to build this site. This landmark represents a significant moment in United States history and its preservation would make an important contribution to the national inventory of historically-significant properties.

Regional and Local Historical Significance: From 1942 – 1951 The armory was the home of the Sheboygan Redskins professional basketball team and was the largest court in that league, which was a precursor to the NBA. In later years, the armory was home to Spaceport Sheboygan, but has been vacant and negelected for several years now. From the 1950s  to the early 2000s, it was used for a variety of community events: high school basket ball games, circus, craft fairs, Festival of Trees, and Hmong community events. Much of the asbestos materials have been removed. The auditorium stage is in good condition and the building interior features wood trim and doors. Residents and preservation advocates argue that the Armory is constructed on man-made land created by filling the Lake Michigan lakebed and therefore does not belong to the City of Sheboygan but to the Citizens of the State of Wisconsin under the Public Trust Doctrine.

Current Condition: The structure appears to be in good condition and is an excellent candidate for rehabilitation. It retains its original architectural ornamentation and plan configuration. The site of the armory was proposed for redevelopment and the structure is facing demolition. One faction in the City government is in favor of redevelopment and is proposing to demolish it. (As of January 2019, the Common Council is poised to vote on whether to send a demolition proposal to the Finance committee for a recommendation.) Others in the City, and several community groups, argue that the Armory is the last public facility available for community events and hope to salvage, it but lack funding and political backing. In April 2018, the Common Council voted overwhelmingly to let a newly formed non-profit “armory community Project” try to raise the funds needed, but then gave that group just 4 months to raise on the order of $3 million or more in the silent portion of the campaign. They raised nearly $1 million in approximately 6 months—an amount that ran short of satisfying the City Council. Community groups argue that the project may have met its fundraising goal had the fundraising campaign gone first to the public, rather than engaging in a silent campaign.

Project originally submitted by The Living New Deal on January 20, 2019.

One comment on “Sheboygan Armory and Auditorium – Sheboygan WI”