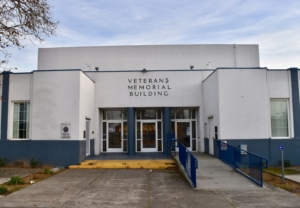 The Shasta County Veterans Memorial Building was constructed with funding from the Public Works Administration (PWA) and completed in 1939. There is a bronze plaque near the entrance marking the contribution of the Federal Emergency Administration of Public Works, i.e., the PWA.

A 2009 article in the Redding Record Searchlight said the following about the hall:

The veterans hall is an example of the Late Moderne style and is one of a handful of architecturally significant buildings in Redding. Buildings like it “still stand as monuments to nationalism based on need,” wrote architectural historian David Gebbard in his book Architecture in San Francisco and Northern California. “That was a great era of design,” said Redding architect Les Melburg of the Moderne period. “It’s a great building – there’s an industrial chic to it, a classic simplicity but with layers of details and design interest.” (quoted in Redding Record Searchlight article)

The building was designed by the Masten and Hurd architectural firm of San Francisco, which later helped design Foothill College in Los Altos Hills and the McAllister Building at Hastings College of Law in San Francisco.

The contractor was Adam Arras & Son. The building was estimated to cost about $70,000, the Shasta Dial newspaper reported in 1937. Some of the money came from local taxes, but most came from the federal government.

The hall was dedicated on Memorial Day 1939 – Superior Court Judge Albert Ross spoke and the Shasta Belles sang “God Bless America.”  Veterans aren’t the only ones who have fond memories of the hall. From the start, the hall played host to community dances, which didn’t sit well with some Redding residents who complained about rowdy crowds and drinking. In the 1950s, before Enterprise High School opened, some students went to school in makeshift classrooms in the hall. In the 1960s, it hosted boxing matches on Saturday nights where ringside seats went for $2.50 and trophies were sponsored by The Shack Restaurant, the Temple Tavern and Thatcher-Stevens Pontiac.

When renovations were made to the U.S. Post Office next door, also an example of WPA Moderne architecture, the hall was used as a temporary post office. 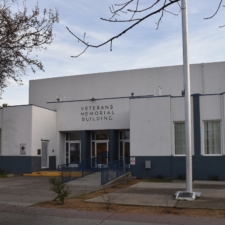 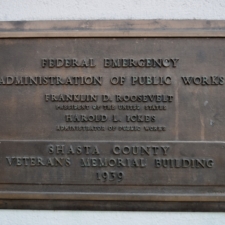 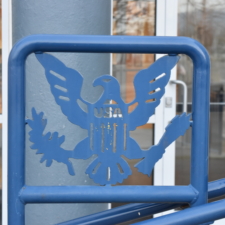