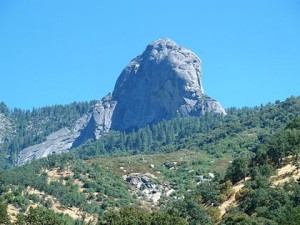 Sequoia National Park and Kings Canyon National Parks were created separately, but because they are contiguous they are administered today by the National Park Service (NPS) as a single unit. Sequoia was the third national park ever created, in 1893, while Kings Canyon was preserved decades later, in 1941, under the administration of Franklin D. Roosevelt.

During the New Deal of the 1930s, the Civilian Conservation Corps (CCC) did extensive work in the parks, building campgrounds, trails, ranger stations and other facilities.   A detailed description of work done on Generals Highway can be found here.

Moro Rock is a well known feature of the park. “A 400-step stairway, built in the 1930s by the Civilian Conservation Corps, is cut into and poured onto the rock, so that visitors can hike to the top. The stairway is listed on the National Register of Historic Places.”   (wikipedia)