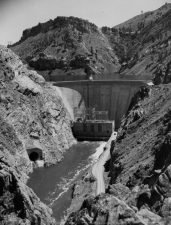 Casper-Alcova Project, Wyoming – The Casper-Alcova Project is being developed initially to irrigate 35,000 acres of land in the vicinity of Casper Wyoming. The more important features are the Seminoe Dam and power plant, the Alcova Dam and the canal system. The revenues from the power plant are expected to repay a large portion of the cost of the project. the Seminoe Dam is of the concrete arch type, with a volume of about 161,000 cubic yards and a maximum height of 161 feet. The storage capacity of the reservoir will be 1,000,000 acre feet. The Alcova Dam on the North Platte River near Alcova Wy, consists of an earth and rock fill embankment with a volume of 1,500,000 cubic yards. This structure will serve as a diversion dam for the main canal. The main canal will have an initial capacity of 1,200 sec. ft. and a length of 106 miles.

All of the major features are under contract and good progress was made by the various contractors during the past year. Alcova Dam is about 60% complete and will be completed by January 1938. Excavation of the diversion and spillway tunnels at Seminoe Dam is practically completed and excavation for the foundation has commenced. Placing of concrete in the dam is scheduled to start about April 1938.

Contract was recently awarded for the excavation of four tunnels on the main canal and work has been commenced on one tunnel. H. W. Bashore is construction engineer on the Casper Alcova Project.”

Project originally submitted by Andrew Laverdiere on May 10, 2017.