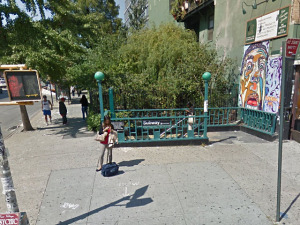 The Sixth Avenue branch trunk line of New York City’s Independent Subway (IND) was constructed during the 1930s with the aid of federal Public Works Administration (PWA) funds. On January 1, 1936, four subway stations opened in southern Manhattan, part of a $17.3 million project that extended the subway from Washington Square to the Lower East Side. The Second Avenue station on Houston Street was one of the four to open at this time.