"The more intact of the two murals is Genevieve Burgeson Bredos 1936 NRA Packages (Figure 2.2). It depicts three men unloading crates from a vehicle and carrying them to a corner store as a woman and child watch. The crates have the National Recovery Act emblem on their sides, a splayed blue eagle with the red letters NRA above (Figure 2.3). The vehicle is a yellow moving truck that reads STORAGE in large letters above HILCREST 0212W in smaller letters (Figure 2.4)."

"Two Works Progress Administration (WPA)-era murals from the 1930s, long thought to have been destroyed during subsequent building renovations, were uncovered in San Diego State Universitys (SDSU) Hardy Memorial Tower in August of 2004. Local student artists Genevieve Burgeson Bredo and George Sorenson completed these murals in 1936 at the entrance and in the hallway of the old library at SDSU, known at the time as San Diego State College. Although portions of the murals were obliterated during construction from 1957-59, some of the artwork remained intact. Non-destructive tile maintenance during the summer of 2004 exposed the murals, which have since been resealed behind the lowered ceiling."
– Mallios and Purvis

One mural by Bredo and parts of one by Sorenson are shown below. However, two other murals by Bredo and one by Ellamarie Packard Woolley have since been lost.

Bredo's 9'x5' "NRA Packages" was fully restored in 2007 and is now on display in the Reference Services area on the first floor of the Library Addition.

Portions of Sorenson's 25-foot "San Diego Industry" remain on Hardy Tower's bottom floor and plans for its restoration and transferal to the Library Addition are underway. 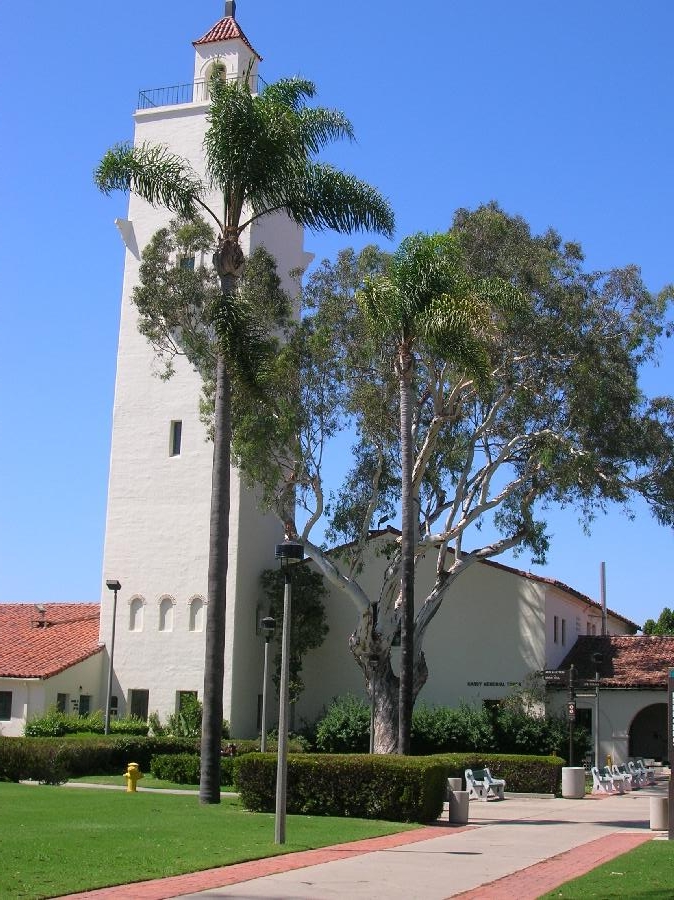 "The mural illustrates, from left to right, the various phases of the tuna industry: a man fishing with a bamboo pole, a man weighing large fish on a scale, fish sliding down a chute toward a cleaning table, an assembly line of women processing the fish, cans of tuna on a conveyor belt, and men standing behind large bins of canned fish, perhaps readying them for market."