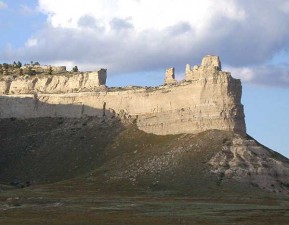 For a short time, construction efforts came under the guidance of an agency known as the Civil Work Administration, which continued until April 28, 1934, when all construction came to a stop. At this time a complete survey was conducted to identify the bluff’s historic and natural resources and to determine its future needs.

During this survey, Dr. Harold J. Cook was named the monument’s first ranger and on December 20, 1934, another federal agency, the Public Works Administration funded some work on the road to the summit, as well as planning for the new museum.

Development at Scotts Bluff National Monument began in earnest with the arrival of Company 762 of the Civilian Conservation Corps. In April of 1935, these civilian laborers, under the leadership of Army officers, assumed responsibility for completing the summit road and work on new picnic grounds. Work on the first wing of the Oregon Trail Museum was assigned to the Fullen Construction Company in the fall of 1935.

Also from the NPS: “The CCC (Civilian Conservation Corps) built nearly every structure at the Scotts Bluff National Monument in the 1930’s – the summit road, Saddle Rock Trail, the visitor center, the maintenance barn, and a residence now used for administration.”

From the National Parks Conservation Association:

The Civilian Conservation Corps (CCC) built four buildings near the monument’s entrance (the Oregon Trail Museum, a ranger residence, a maintenance building, and public restrooms); constructed the Saddle Rock Trail, summit and visitor parking lots, and the Summit Road and tunnels; planted trees and vegetation to control erosion; built a utility building and residences for staff; and fenced portions of the monument. The Works Progress Administration (WPA) took over for the CCC in 1938 and worked on what was called at the time State Highway 86 (now a county road), which runs through the monument. The WPA also enlarged parking areas and installed interpretive markers. Today Scotts Bluff maintains several historic Civilian Conservation Corps-era structures and uses them in a variety of ways—as the visitor center and administrative offices, among others. Active use of historic structures helps ensure they are preserved.