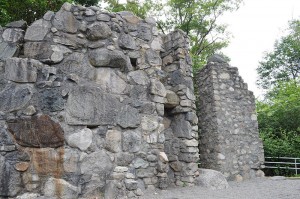 “This major attraction at Camp Long was designed by Clark Schurman. His dream was to build a human-made mountain incorporating every potential rock climbing problem into its design. After taking a winter to make a clay model of the rock, Schurman worked very closely with the W.P.A. workers to create his dream rock. It took 2 years to complete the 20 foot high, erratically shaped climbing rock. Schurman called it Monitor Rock after its intended purpose to “warn, remind, advise and instruct.” After Schurman’s death in 1955 the rock was renamed “Schurman Rock” to honor Clark Schurman’s contribution to Camp Long and mountaineering. On the occasion of the renaming on September 7, 1957, William G. Long gave a special radio address.”   (http://www.seattle.gov)