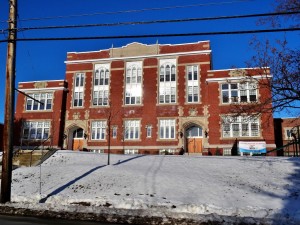 During 1933 and 1934 much-needed repairs were undertaken to the school system. From the annual reports of the city of Waterville:

“School Superintendent: Through the efforts of the city officials, funds from the Federal government have been made available for much needed work in the building that would otherwise have remained undone for many years. During the summer months the corridor, auditorium, and gymnasium walls and ceilings were cleaned and refinished with washable paint. Early in the fall the balcony was removed from the end of the gymnasium. This permits of a regulation basketball surface, 60 ft. long and 3-5 ft. wide. Formerly the playing surface of 47 ft. square was especially inadequate for the Senior-High School basketball teams that are obliged to use the Junior’ High gymnasium. During the Christmas vacation twenty classrooms received the same treatment as did the corridors in the summer. At the present writing 650 auditorium chairs have been repaired and are being varnished.

Some weeks ago application was made through the Civil Works Administration for an allocation of Federal funds to be devoted to school-house repairs. This application was approved and work promptly started. Much has been done at the Junior High, North Grammar, South Grammar, Western Ave., Grove St. and Walnut St. buildings. Very recently these activities have stopped but I have no doubt they will be continued and finally completed when another appropriation is made by the Congress. The completion of these various school projects will put our buildings in better condition than they have been for many years.”

“In Mayor Jackson’s report [he] recommend that the incoming administration investigate the possibility of obtaining a P. W. A. grant for the proposed addition to the Senior High School.”

From the Maine Encyclopedia: “The [former Senior High on 21 Gilman Street] school was built between 1909 and 1913, with Works Progress Administration (WPA) funded additions in 1936 and 1938.”

The site is now mixed-use housing.