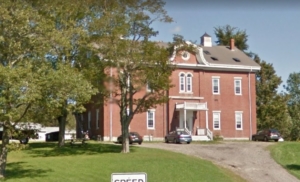 According to town reports, needed repairs were conducted on the former school system of Searsport by CWA, FERA, & WPA. Of the school houses mentioned, only one on Mt. Ephraim St. survives as an apartment building.

1933
“There were three projects of grading school grounds entered under the C. W. A. which the Selectmen have engineered. This work will certainly improve the looks of the buildings and also make it possible for the children to play on the school grounds, instead of in the street. Much credit is due the Selectmen for the interest that they have shown in these projects. The grading of the Central School grounds has progressed very nicely and they are now working on the grounds at the Nichols School. It is hoped that the work at the Mt. Ephraim School can be done later but the winter weather is hardly the time to attempt to level ground and remove large boulders and stumps. There is a nice playground at the Mt. Ephraim School if it could be leveled off and I think there is sufficient dirt on the grounds to do this and also keep the roof water away from the building.
A school for adults is being held in Searsport under the Emergency Fund for Education. The class meets privately once a week for a lesson of one hour and a half. It has an enrollment of six. Milk is also provided for the noon day lunch or at recess. This can be purchased for 3 cents a half pint and in cases where it can not be paid for by parents it is furnished free and paid for out of Federal Funds. During the month of January over 1,000 half pints were provided in the Central and Nichols Schools.”

1934
“The Selectmen showed their interest in the School Department by allowing us to have the E. R. A. money for the winter project. The halls in the High School have never been refinished and something needed to be done before long.”

1935
“Much was accomplished with the repair money this year as the Federal Government furnished the labor, which left only the material to be paid for by the town in a large amount of the work. Metal flashing was not put on the High School building as it was thought that the gutters could be repaired at much less cost. After repairing the High School roof, the roof at the Park school was reshingled; then a very thorough job was done at the Mt. Ephraim school. Water has been doing a lot of damage to the buildings and a drain was put in and also the grade around the school house was changed so that surface water would drain away from the building. Then the outbuildings were placed on new foundations. “