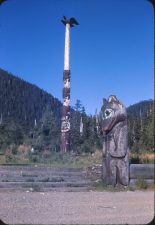 The Civilian Conservation Corps (CCC) relocated the Grizzly Bear Post, from a village in Southeast Alaska to the newly established Saxman Totem Park. CCC set up a totem restoration project in 1938 and Tlingit carvers enrolled in the CCC lead the work.

In the 1961 volume, The Wolf and the Raven, anthropologist Viola Garfield and architect Linn Forrest describe the visual characteristics of the Grizzly Bear Post: “The Grizzly Bear post (also identified as Kats and His Bear Wife) belongs to people of Kats House of the Tongass tribe. It was approximately one hundred years old when brought from Village Island to Saxman in 1939 to be incorporated in the totem park. According to legend this is the fourth pole of its kind carved to commemorate the experiences of Kats. The first one was carved by Tongass people living near Unuk River on Behm Canal. From there they moved to Cape Muzon, and the second post was set in front of the Kats House there. Later some of the Kats House people moved again, settling in the vicinity of Hydaburg, where the third post was carved. (This was before the Haida migration of Prince of Wales Island, more than two hundred years ago). Members of the house again migrated, settling at Tongass and at Village Island, where the present post was carved. When the Tlingit moved to Saxman, frame structures were built, and the carving belonging to the plank community house was left behind.

In Ketchikan Park is another Kats pole, symbolizing the same story. When the people moved to Tongass, two brothers separated, and each built a house of which he became the head or chief. One carved the above post to commemorate the legend of their origin, while the other kept the original entrance pole. Carvings on a separate pole belonging to another branch of the Kats House people, at Saxman Totem Park, illustrate essentially the same story.”

The photographic material published on this page by the Living New Deal was provided by courtesy of Linn A. Forrest (1905-1986), a practicing architect who photographed the totem poles at the time of their restoration, between 1939 and 1941. Forrest oversaw the joint program of the Forest Service and the Civilian Conservation Corps to recruit Alaska native carvers in the restoration and recarving of totem poles throughout Southeast Alaska. Employed by the U.S. Forest Service in Oregon, Forrest transferred to Juneau, Alaska in 1937, where he undertook the totem restoration as one of his first projects. Under his supervision, indigenous carvers preserved and restored 103 totem poles and three Tlingit and Haida community houses. Forrest documented the restoration process and maintained notes and a photo record of a significant portion of the work. He used a Leica camera designed for the then new Kodachrome 35mm color slide format.