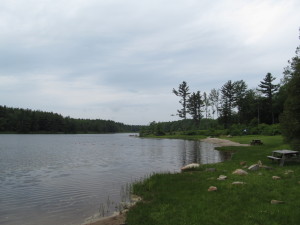 From the Massachusetts Department of Conservation and Recreation:

Before 1935 York Lake did not exist. It is man-made. It was created out of a swampy wetland, built as part of the New Deal’s Civilian Conservation Corps (CCC), a U.S. Federal Government conservation program. The CCC improved the nation’s natural and human resources and created opportunities for the public to recreate and appreciate a healthy outdoor experience.

From 1933-37 the 196 Company CCC, whose nearby camp site off Route 183 just south of here, once supplied 200 men a season to work in the state forest. Formerly unemployed men then earned a dollar-a-day, were provided food, clothing, shelter and an opportunity for self improvement. The CCC program was a popular success throughout the desperate years of the Great Depression. CCC projects focused on improving hardwood growth, planting acres of pine and spruce, eliminating gypsy moths pests and White Pine Blister Rust disease, removing fire hazards and fighting forest fires, building forest access roads and creating wildlife refuges. They also created places for public recreation like York Lake, the swimming and picnic area, the foot trail you’re hiking on, and former campsites. The 196 Company built so many dams in nearby state forests they acquired the name The Sandisfield Beavers. After its completion York Lake became an extremely popular recreation destination for tourists and local residents.

Later, the dam barely survived the heavy rains of the Great Hurricane of 1938 and required some repair. But it was the Hurricane Diane in 1955 that completely washed out the dam, closing the recreation facility until it was rebuilt in 1959 and continues as-built today.

Location notes: Site is southeast of the town of Monterey on Sandisfield Road.