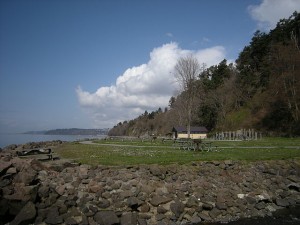 WA.gov:
“Saltwater State Park is a camping park featuring 1,445 feet of saltwater shoreline on Puget Sound, halfway between the cities of Tacoma and Seattle. The two cities jointly and literally buried a hatchet at the park during the 1926 park dedication as a symbol of the end of their mutual competition. The park is a recreational destination nestled in the core of urban living, with forested trails and beach access.

Visitors may explore marine life in tide pools at the park and the seasonal spawning of salmon in McSorley Creek. Saltwater State Park is the only state park that features an underwater artificial reef, providing divers an opportunity to discover the diversity of sea life and marine environments of Puget Sound. The reef is a protected marine sanctuary and harvesting is not allowed. The park is on the flight path of Sea-Tac International Airport.

The park dedication in 1926 included a peace effort to stop the bad feelings between the cities of Tacoma and Seattle. The park is located halfway between the two cities, and a hatchet is symbolically buried under a rock somewhere in the park. Much of the park we see today was built by the Civilian Conservation Corp in the 1930s.”