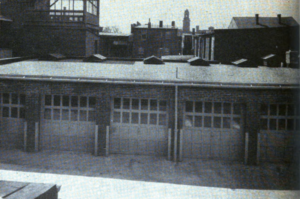 The Alley Dwelling Authority (ADA) funded the construction of the Ruppert’s Court Automobile Repair Shop in Washington, DC between 1935 and 1936. In 1943, the building became a woodworking shop for the ADA,

It is unknown to the Living New Deal if any part of this structure still exists today, but it is not likely.

The alley where Ruppert’s Court Auto Repair Shop was located is now called “Lincoln Ct. SE.” and is historically known as DC’s “Square 762.”

(Note: On page 7 of the ADA’s 10-year report, Ruppert’s Court is said to be located in Square 672. However, in the ADA’s 1937 fiscal year report, it is reported as Square 762. Other sources—see source list below–affirm 762, which is the present-day location of the newly-named Lincoln Ct. SE.)

The ADA was one of the earliest New Deal initiatives to provide better housing for low-income Americans. It replaced unsafe alley dwellings in Washington, DC with more modern and affordable houses and apartments. The ADA existed from 1934-1943 as a federally controlled special authority. It then slowly evolved into today’s DC Housing Authority, an independent agency of the DC Government.

During the earliest years of its alley clearance activities, the ADA also created five facilities for automobile repair or parking. Ruppert’s Court was one of these.