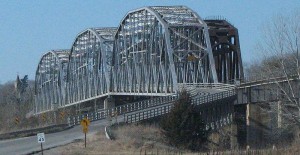 “The Rulo Bridge was a truss bridge over the Missouri River on U.S. Route 159 from the village of Rulo in Richardson County, Nebraska, to Holt County, Missouri.

It was built in 1939 by the Works Progress Administration and Kansas City Bridge Company and was added to the National Register of Historic Places in 1993. It was featured in the movie Paper Moon.

In March 2009, Nebraska Department of Roads approved a plan for a new bridge, which would be 650 feet (200 m) south of the current bridge. The current Rulo Bridge would then be dismantled.